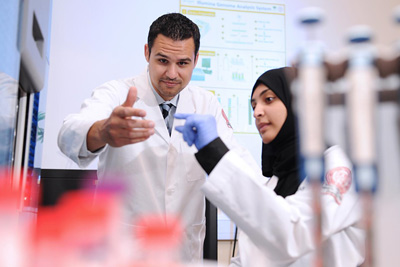 Researchers at Weill Cornell Medical College in Qatar (WCMC-Q) have identified a region of the date palm genome linked to gender, making it possible for the first time to quickly and easily identify male and female trees. The finding provides a crucial piece of information for more efficient cultivation and propagation, as well as additional genetic studies.

The study, led by Joel Malek, director of WCMC-Q's genomics lab, was published May 30 in the online edition of the journal Nature Biotechnology.

Date palm is a dioecious species, meaning that individual plants are either male or female; but the mechanism for gender determination in date palms has been a central question for thousands of years.

The new research provides the first DNA sequence evidence that gender is under genetic control through an X-Y system of gender inheritance similar to that of humans.

"A simple and reliable way to distinguish between male and female seedlings has long been sought, not only for agricultural purposes, but also to promote basic date palm studies, which have been hindered by dioecy and long generation times," Malek said.

Female trees bear the fruit, making them much more valuable than male trees, but early identification of the more valuable female trees is difficult because it takes about five to eight years for female seedlings to bear the distinguishing fruit.

In 2009, Malek and WCMC-Q colleagues sequenced a draft version of the date palm genome. The research team cooperated with the Biotechnology Center at the Ministry of Environment in Qatar, which provided date palm samples.

The researchers will also study the date palm's unique tolerance to salinity and high temperatures, with the goal of transferring that tolerance to other plants through genetic modification, he said.

The WCMC-Q research used samples that were part of a date palm breeding program carried out in California from 1948 to 1974 and incorporated into a national repository, which maintained the lines as part of a mission of conservation of genetic resources. The repository is operated by U.S. Department of Agriculture's Agricultural Research Service.

Varieties of dates are notoriously hard to identify even by experienced growers, so access to pure lines of male date palms was crucial, Malek said.

The project also validated the genetic identity of the male and female varieties maintained in the United States against same-named varieties from the Middle East, reinforcing the integrity of the collection after being maintained for many years in several different locations.

Date palms play a significant role in agriculture throughout the Middle East, Northern Africa and Pakistan. The fruit is a major source of nutrition in the areas, and the tree itself plays an important role in the development of sustainable agriculture in many drought and saline-affected regions of the world. References in the Quran have kept alive the use of dates for medicinal purposes over the centuries.