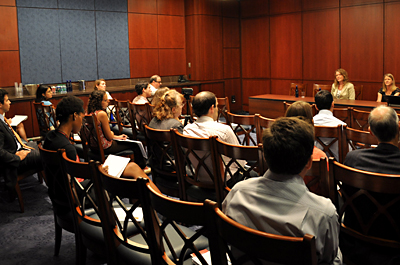 Mark Lawrence
On the panel from right, Laura Harrington and Jody Gangloff-Kaufmann speak to media at a briefing on Capitol Hill on July 12.

Cornell bug experts Jody Gangloff-Kaufmann and Laura Harrington created a buzz on Capitol Hill July 12 when they warned about bedbug and mosquito invasions to television and radio media and then attended a swarm of meetings with Congressional and Senate research staff.

Gangloff-Kaufmann and Harrington's Washington briefing was part of a program organized by Cornell's Atkinson Center for a Sustainable Future and the Cornell Agricultural Experiment Station.

During the media event, Gangloff-Kaufmann, an entomologist and senior extension associate with Cornell Cooperative Extension's New York State Integrated Pest Management Program, said the resurgence of bedbugs in the last decade occurred after the pests virtually disappeared in the United States from 1960 to about 2000.

Some reasons for the resurgence could be due to home-use bans on such insecticides as lindane, chlordane, diazinon and dursban and an increase in global travel in the last decade, Gangloff-Kaufmann said.

"Bedbugs are completely tied to human behavior. They do feed on bats, birds, rodents and chickens, but they are quite adapted to people," she said.

The bugs are particularly hard to get rid of when they infest multiple-family apartment buildings, she added, where they can spread between apartments. In lower income housing, landlords may be unwilling to help, thus putting an added burden on the poor and elderly, as state-of-the-art heat treatments can cost up to $3,000 for a one-bedroom apartment, Gangloff-Kaufmann said.

Bedbugs often carry a stigma of poverty and filth, even though the bug's resurgence probably began in the upscale travel and hotel industry. However, bedbugs can flourish in communities with poor, elderly, disabled and undocumented people who cannot afford interventions, which reinforces the stigma.

She added that very little funding has supported research on bedbug since before 1960, a trend that must change to combat the pests.

To prevent bedbugs, the key is "awareness, awareness, awareness," Gangloff-Kaufmann said. Check beds and hotel rooms for inky fecal stains on sheets, mattresses, box springs and wood. If possible, "don't treat them yourself, hire a professional because it takes knowledge and skill to get rid" of the bugs, she added. But those with limited resources may consider buying mattress encasings, drying linens and clothes in a dryer, using a hair dryer around infested areas and getting landlords involved.

Harrington, a Cornell associate professor of entomology, noted that mosquito-transmitted diseases are increasing around the world, including the United States, due to increased global travel, failures of public health and mosquito control programs and climate changes that alter mosquito ecology and habitats. Asian tiger and Asian bush mosquitoes, for example, can transmit more than 22 different disease-causing viruses and are on the rise in the United States.

Mosquitoes have spread West Nile virus throughout the country, for example, yet officials have not learned lessons "as well as we should have," Harrington said. Also, dengue fever has been introduced in the United States, with recent outbreaks in Florida and Hawaii.

The nation could also face the introduction and spread of other mosquito-spread diseases, such as Japanese and Venezuelan encephalitis, Rift Valley fever and chikungunya, an emerging tropical viral disease that causes fever, headache, fatigue, nausea, vomiting, muscle pain, rash and joint pain.

Harrington conducts research on the reproductive biology of mosquitoes to develop new biological control methods that reduce egg production and curb the female's appetite for blood.