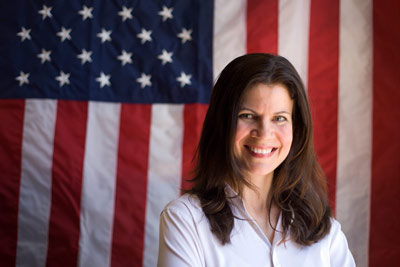 Jason Koski/University Photography
Melissa J. Ferguson, associate professor of psychology, conducted the first study to examine the effect of seeing the American flag on voters finds that such exposure moves voters to the right.

Expect even more flags at Republican campaign events. And if the Democrats were wise, they might well strip the stage of flags altogether, suggests a new Cornell study, the first to look at the political impact of the flag's image on Americans.

The research finds that for up to eight months after glimpsing the stars and stripes, voters of all political persuasions shift toward conservative Republican attitudes and voting behavior.

"Part of the reason we think this effect is so durable is because we primed people with the flag while they were thinking about their voting choices," said Melissa J. Ferguson, associate professor of psychology, who conducted two experiments with Travis J. Carter, Ph.D. '09, of the University of Chicago and Ran R. Hassin of Hebrew University. The results were published in Psychological Science July 8.

Shortly before the 2008 presidential election, the researchers recruited voters via social media to participate in an online political survey in exchange for a gift card. Half the screens shown to participants sported an unobtrusive image of the American flag. The researchers contacted participants immediately after the election and asked them how they voted. Those who had been briefly exposed to the flag, compared with those who had not been primed with the flag, were significantly more likely to have voted for McCain versus Obama.

"A single, incidental exposure to the flag a couple weeks before the election changed how people voted," Ferguson said. Yet 90 percent of those surveyed said they believed seeing the flag would not influence their voting.

Eight months later, participants were asked about President Obama. Those who had been exposed to the American flag on the initial survey felt less positive about Obama's job performance. "We did predict that this would happen, but we were a little surprised that it lasted eight months," said Ferguson, who studies how incidental cues in the environment influence beliefs, goals or behavior in unconscious ways.

In a second experiment in spring 2010, the researchers showed study participants pictures of buildings with and without flags. Again, seeing the American flag shifted Democratic and Republican voters toward the right -- although participants did not believe it was happening to them, even after they were debriefed.

"People readily agree that Republicans seem to own the flag, but they don't think that the flag is going to push them toward that end of the scale," Ferguson said. "That's the surprising part of the findings. Even for Democrats, being exposed to the flag a single time pushes them toward the opposite end of the ideology scale. They don't realize that this kind of cue is influencing their response. But we can say that on average, behavior of those exposed to the flag differed from those who were not exposed."

Ferguson and her colleagues have also studied the impact of Israel's flag on Israelis (conservative parties are identified with it, but due to the multiparty system, the effect is not as clear).

Next, Ferguson plans to look at the impact of candidates' wearing flag pins on their lapels. She suspects that incidental exposure to flags (such as at a political convention) is unlikely to influence voting. The strongest, longest effect comes "when we're about to crystallize our attitudes or our opinions or intentions" as the ballot box looms, she said. "If we're watching a debate, talking about politics or about to enter the voting booth, exposure to the flag could shape our thought and behavior."

Funding for the study came from the United States-Israel Binational Science Foundation and Cornell.