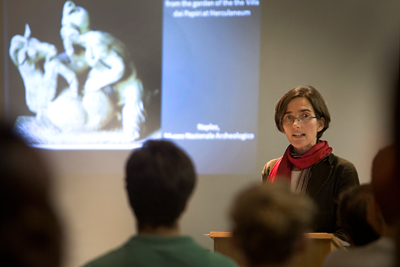 Jason Koski/University Photography
Annetta Alexandridis presents a lecture on bestiality as it was depicted in ancient Greek art and myth Sept. 21 at Cornell Library.

Taboo subjects can reveal deep truths about a society, and bestiality has long been a topic of fascination and repulsion in many cultures.

Sex acts between animals and humans are "an attempt to draw the line between civilized and uncivilized," said Annetta Alexandridis, assistant professor of classical art and archaeology in the Department of History of Art and Visual Studies. Alexandridis presented "Bestiality in Ancient Greece: Divine or Monstrous Love?" in Cornell Library's Division of Rare and Manuscript Collections Sept. 21.

"Bestiality" has no equivalent word in ancient Greek, Alexandridis noted, but art from that culture did depict zoophilia: a "strong emotional bond between humans and animals that can also include sex acts."

Alexandridis focused on visual representations of zoophilia in classic Greek mythology, noting that although it is part of many stories, only four of those myths are represented in art that still exists today.

Among them is the story of Zeus, the king of Greek gods, and Ganymede, a beautiful young prince whom Zeus spirits away to Mount Olympus. In the red-figure pottery dating to 480 BCE, artists showed Zeus in human form. A century later, Zeus' image had been replaced by a giant eagle tenderly carrying Ganymede off in his talons.

Only Zeus appears as an animal in pottery, terracotta figures and other visual representations, but many stories portray gods assuming animal forms, she added. "Testing the boundaries between humans, animals and gods persisted for centuries."

Drawing on the library's collection of rare books, manuscripts, photographs and other artifacts, Alexandridis' subject complemented the current exhibition, "Animal Legends: From the Trojan Horse to Godzilla," curated by Laurent Ferri, in Kroch Library's Hirshland Gallery next door, which explores the complex relationships between people and animals.

After the lecture, Brenda Marston, curator of the Human Sexuality Collection, presented books on bestiality from the collection. They ranged from dime-store paperbacks eroticizing animals to a tract describing a 1754 legal case in which a man was convicted of having sex with a cow and hanged in Dublin.

"When talking about human sexuality, people often reference animals in different ways," Marston said. "Historically, many books lumped bestiality in with sexual practices that were considered abnormal for the time, such as adultery and homosexuality."

Gwen Glazer is the staff writer and editor for Cornell University Library.