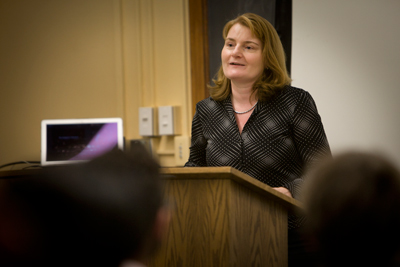 Gangster films of the 1930s pushed the boundaries of "American-ness" at home and abroad when they introduced sound and more diverse characters, said Professor Sabine Haenni in her Oct. 19 talk in Goldwin Smith Hall.

Haenni, associate professor of American studies and theater, film and dance, studies how the gangster genre expresses themes of diversity, as well as the genre's reception abroad. The films point to what Haenni characterizes as the "dark history of globalization," a time when violence resulted from capitalist changes in global society against the backdrop of the 1930s when the Great Depression was at its height.

In the films of the 1920s, criminality was no longer seen as a problem of groups on the outskirts of society, but rather as the result of choices of the individual, said Haenni. Gangsters were portrayed as an integral part of mainstream, middle-class society, as seen in films like "The Public Enemy" (1931), where the gangster began to look "potentially respectable," as though criminality was simply another route to upward social mobility. In this new context, said Haenni, "every American could potentially be a gangster."

She pointed to the example of the gangster protagonist who operated as a semi-legitimate businessman in the1934 film "Manhattan Melodrama." The film concludes with his walk to the electric chair, while his brother, a politician, leaves the governor's mansion, where corruption is inevitable, because "the only acceptable moral position is literally outside humanity." While the film "reveals a society where all positive values seem in danger," Haenni said, it stops short of defining what constitutes American identity.

The gangster film not only expanded the definition of the middle class by incorporating previously excluded people of distinct classes and ethnicities, but also questioned the traditional place of the woman, argued Haenni. After screening a clip of "The Public Enemy," she noted, "there's a lot to be said here about how these women move their bodies, occupy space, drape themselves. ... In the end they are profoundly confused as to what they want. They find themselves in new worlds, economically and sexually." The gangster films also hinted at homosexuality but did not resolve the challenges posed to the status quo, she said, adding that in interpreting gangster films, it's crucial to understand how they were perceived by their original audience.

The international community also adapted the gangster genre for their own purposes. Haenni pointed to the example of French director Maurice Tourneur, who turned his 1934 gangster film "Justin of Marseille" into a commentary on French regional and anti-nationalist politics.

In Socratic fashion, Haenni left her audience with a question to ponder: Were gangster films expressions of fear of change during a turbulent time, the consequences of social transgression, or did their creators intend them to subtly chip away at cultural norms?

Erica Rhodin '12 is a student writer intern for the Cornell Chronicle; Linda B. Glaser is staff writer for the College of Arts and Sciences.