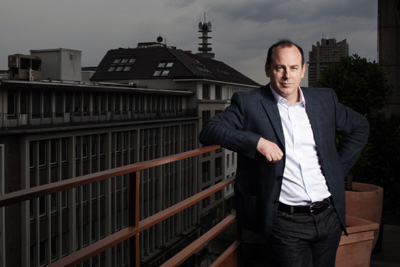 In between jaunts to Jakarta and South America to perform before thousands of punk fans, Greg Graffin can be found in Warren Hall, where his audience of 60 rapt undergraduate students hears him preach about evolution instead of revolution.

Famous for leading the punk rock revival of the early 1980s, the Bad Religion singer says he was always a bit of a "science nerd." The Los Angeles native fell in love with Ithaca while earning his 2003 Ph.D. at Cornell in zoology. (As part of his doctoral research on perspectives from evolutionary biology, Graffin asked 149 prominent evolutionary biologists whether they believed in God; 130 answered no, but only a handful responded that they considered science and religion to be incompatible).

"I consider it a great privilege and an amazing bit of luck that we [Bad Religion] are as well known as we are today," Graffin said. "But I never leveled with myself that it was as intellectually satisfying as any academic pursuit. Being able to lecture and being able to participate in the conversation that goes on in science, professionally, is also a great privilege."

Now he wants to inspire the next generation to think critically and creatively, with open minds that challenge commonly held assumptions in a way that can contribute to informed social discourse. As he writes in his new book, "Anarchy Evolution," "That's ultimately why it's so important to know about evolution, because it can change the way we think about ourselves and the world around us."

Graffin says his artistic side complements his scientific one, and both entail creativity.

"True creativity surprises us because it doesn't obey the rules," he said. "It comes out of nowhere. Almost like when you study the fossil record and you find species that once existed that surprise you because they don't seem to obey the laws of biology."

The course, Evolution, (BIOEE 2070), was taught for many years by recently retired professor Will Provine. A new version is taught by Graffin and Richard Harrison, professor of ecology and evolutionary biology (E&EB). It aims to teach the basic science of evolution to non-biology majors, using modern case studies to illustrate how the science is applied and interfaces with real-world questions. The tag-team teachers address such issues as genetics, personalized medicine, drug and pesticide resistance, climate change and the importance of biodiversity in this semester's inaugural class, which reached capacity almost immediately.

Graffin's background is a striking contrast to Harrison, an evolutionary geneticist and East Coast native who has stuck with the Ivies for his entire career -- undergraduate degree from Harvard, Ph.D. from Cornell and nine years teaching at Yale before returning to Ithaca in 1986.

"We come from rather different backgrounds and have different expertise. It's a very different life and lifestyle, but we seem to be compatible so far," Harrison said. "Our hope is there may be some public exchanges between us in front of the students."

He hopes to mold the course into one of the most popular on campus.

"Many of us in the E&EB department felt that a non-major's evolutionary biology course was a particularly critical course since evolution is obviously controversial in the eyes of the general public," said Harrison. "We really want to reach a broader audience of people who aren't biologists, but hopefully will go out, having learned about evolution, and be able to speak about it coherently and cogently when they get into the real world."

Bethany Liebig '12 is a student writer for the College of Agriculture and Life Sciences.