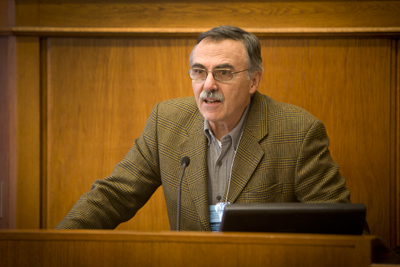 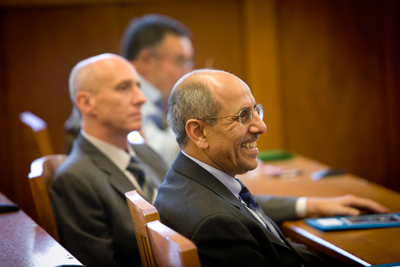 To effectively rethink water policy, arid southern European and Middle Eastern countries must combine approaches to sustainable resource management with a sense of accountability and an understanding of local cultures, argued visiting scholars at the Water Scarcity and Policy in the Middle East and Mediterranean conference hosted by Cornell Law School Nov. 4-6. The conference looked at such topics as water sharing; hydrology, climate and land; water rights; and water in Palestine and Israel.

At a Nov. 5 panel on water scarcity in the Mediterranean, scholars discussed the implications of water management for regional stability and transnational cooperation. The Mediterranean basin is not only one of the most water-stressed regions of the world; it is widely considered to have the most potential for conflicts over scarce water, said organizers.

Tussles over water policy are a contributing factor in the ongoing Tunisian revolution, said the Universite de Paris' Alia Gana. Past water law reform resulted in Tunisia's current decentralized system of water usage associations, which resulted in an inequitable sharing of water between agricultural and civilian users.

Without greater accountability of water users at the local level, current civil unrest is only encouraged, she said. "In spite of water-law reform, Tunisia is missing an enabling sociological and institutional environment," Gana said. "Much depends on the balancing of power relations and the ability of civil society to consolidate as a political force."

Water can be a powerful symbol of political struggle, said Gaspar Mainal Buil of the University of Zaragoza, Spain. Political pressures have impacted Spanish water policies, but as a result of a multilateral European Union water framework directive, the country is home to the largest irrigated area in Western Europe.

Still, "in dry regions, how is the fight for human rights and achievement of a democratic status linked to water management and distribution?" Buil asked. "The contestation of water usage associations did not have political tones in Spain, because water management was part of a whole process of economic liberalization. But what we need to understand is how the process of forming water policy can allow a small minority of people to appropriate power."

Political instability and conflict have dominated the Southern European region for decades, he said. But "effective water governance and cooperation" among Greece, Montenegro and Kosovo in sharing the Sava and Drin river basins have helped smooth relations between those countries.

"Water has the potential to fuel wider conflicts, but it can also act as a bridge for collaboration," he said. "There are two key challenges: These countries must put human development and economic considerations at the goal of trans-boundary cooperation and replace unilateral action with multilateral action, by including stakeholders such as NGOs in decision making."

Ultimately, noted Irene Klaver of the University of North Texas, local engagement and commitment to seeing water as a public resource are key to ensuring resource management and the implementation of successful water policy.

"As rivers, water is the anchor of civilization and bones of contention," Klaver said. "They are rich ecological and cultural corridors in many cultures; indeed, water represents the human capacity for transformation."

Conference sponsors were the Atkinson Center for a Sustainable Future, Cornell Law School's Clarke Initiative for Law and Development in the Middle East and North Africa, the Department of Biological and Environmental Engineering and the Mediterranean Initiative of the Cornell Institute for European Studies.