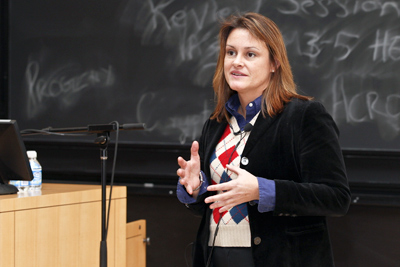 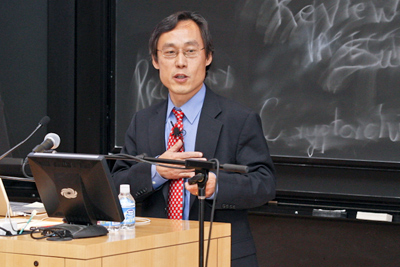 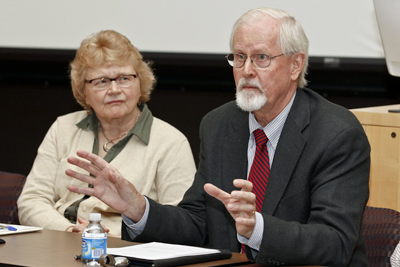 Universities need to work with industry to develop realistic solutions to harmonize food systems with human health, according to panelists at a Morrison Hall symposium on Oct. 28.

Hu said there is a mismatch between our food system and the behaviors it promotes, which has led to malnutrition and obesity in equal measures. He shared scientific evidence that people who ate certain foods consistently gained weight and often became ill. Those who consumed one to two servings of soda per day, for instance, increased their risk of diabetes by 25 percent, and cardiovascular disease by 35 percent.

Hu said "toxic food environments" are probably to blame. The mantra "move more, eat less" is oversimplified, and metrics such as fat content are also not very helpful, as high-fat dairy products like yogurt and whole milk have been shown to lead to weight loss, he said. Rather, the overall quality of the diet should be considered, as well as other lifestyle factors such as sleep and smoking, he said.

"Genes may create a loaded gun, but environment pulls the trigger," he said. "Small diet and lifestyle changes can make big differences. That provides us with a tremendous opportunity for prevention."

Bradley responded by pointing out that PepsiCo was the first company to eliminate trans fats from its products, investing $300 million to find healthier oil, and has reformulated its snacks to include 25 percent less salt, 15 percent less oil and 25 percent less sugar. Its portfolio of nutrition products such as Quaker, Naked Juice, Tropicana and Dole has doubled in the past 10 years, and the company expects it to grow by another 50 percent.

When developing a healthier food system, professors and policymakers need to be realistic about translating nutrition insights into real impact, she said.

"You can have the best scientific advancements in the world, but if you don't know how to deliver them to the world, to consumers, they're useless," Bradley said.

Cornell nutrition professor Christine Olson said that she is hopeful that consumers can make the right choices given the right motivation, based on her work with pregnant women who make "stunning behavioral changes" for the sake of their babies.

Cornell food science professor Olga Padilla-Zakour said consumers should be better educated about the full range of healthy food choices: "Processing is not all bad. It can extend shelf life and maintain nutrients. It is tasty, convenient and affordable," she said.

Finding a one-size-fits-all solution to malnutrition is nearly impossible, but governments are doing a tremendous amount of harm by not considering nutrition when determining food policies, said Per Pinstrup-Andersen, the H.E. Babcock Professor of Food, Nutrition and Public Policy at Cornell.

He said the focus tends to be on agricultural production, rather than what happens before and after the harvest, and he argued that there needs to be more investment in fruit and vegetable research, as well as the economies of food systems.