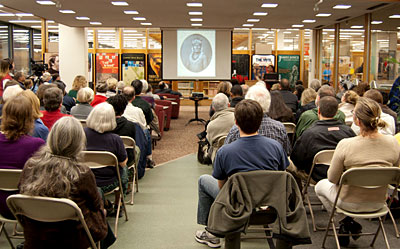 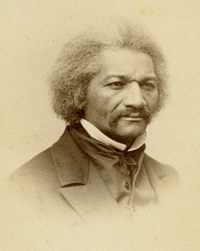 Courtesy Cornell University Library/Division of Rare and Manuscript Collection
A albumen print of abolitionist Frederick Douglass, circa 1860. The photograph is part of the library's new exhibition "Dawn's Early Light: The First 50 Years of American Photography."

The power of an image extends far beyond its original purpose.

At a Nov. 16 lecture, Deborah Willis -- a preeminent historian of African-American photography -- tackled the original purposes and the tacit meanings of a host of photographs that are part of a new exhibition, "Dawn's Early Light: The First 50 Years of American Photography," in the library's Division of Rare and Manuscript Collections.

Willis, who delivered the exhibition's opening lecture to a crowd of more than 100 people in Olin Library's Amit Bhatia Libe Café, serves as chair of the Department of Photography and Imaging at the Tisch School of the Arts at New York University. Photography was "embraced as a new medium" in the 1830s, Willis said. Images in the exhibition offer new perspective on the ideas of posing, which, in the early days of photography, sometimes required braces to keep children or pets still long enough for the necessary exposure times.

Pictures of runaway slaves and popular celebrities, street scenes and Civil War battlefields, natural phenomena and family portraits -- all of these show how photographs changed America, she said.

Among the individual images Willis highlighted from the library exhibition was a photograph of abolitionist Frederick Douglass that shows him as "a forceful man" whose sense of self-worth is clearly visible.

"We see a fierceness, a sense of dandyism, a sense of purpose," she said. "Photographs show us that this is a dignified man."

She also showed images of slaves, including one of a woman in profile, stripped to the waist. Willis noted that it begged the question, "Is she a willing subject to be photographed or a scientific subject to be examined?"

Introducing Willis, Carl A. Kroch University Librarian Anne R. Kenney noted that photography is "critical to our understanding of the 19th-century milieu that led to the establishment of Cornell University in 1865. We are pleased to obtain this collection in toto, and I view it as one of the library's gifts to the university for its sesquicentennial."

The exhibition features just some of the images from a larger collection of more than 16,000 19th-century American photographs from the Beth and Stephan Loewentheil Family Photographic Collection. Some highlights include multiple images by preeminent Civil War photographer Mathew Brady, a photograph of American Red Cross founder Clara Barton sitting with soldiers, a personal photograph album compiled by Mark Twain, and landscapes depicting the country's westward expansion.

The exhibition, which is in the Hirshland Exhibition Gallery on level 2B of Kroch Library, runs through
May 4.

"This collection from the Loewentheil family stands as one of Cornell Library's most significant acquisitions," said Katherine Reagan, curator of rare books and manuscripts. "It provides rich visual documentation that will complement and extend the library's major textual collections on 19th-century America. Moving forward, the images in this collection will vastly increase our ability to understand our history."

The lecture and reception were funded by Gail '56 and Stephen Rudin.

Gwen Glazer is the staff writer for Cornell University Library.