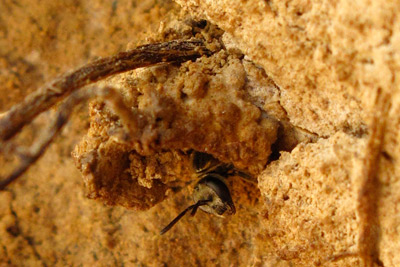 When a scientist discovers a new species, one of hardest tasks is naming it. A Cornell researcher faced this challenge many times over when he discovered 11 new U.S. sweat bee species (subgenus Lasioglossum [Dialictus]) that live east of the Mississippi and mostly in the Northeast.

"It's one of the most challenging aspects of the job, since the name lasts forever," joked Jason Gibbs, a postdoctoral associate in the field of entomology, who published his findings Oct. 28 in the journal Zootaxa. Overall, the study provides a revised classification of 97 metallic species of Lasioglossum (Dialictus) found in eastern North America.

"When you have 2,000 species of sweat bees, that means there are 2,000 names you can't use," he added. Four of the species were found in the New York City area, one of which Gibbs named L. gotham.

The fact that these bees were found in New York "highlights how little we know about this group of insects that are known to be extraordinarily important for ecosystems and agriculture," due to their services as pollinators, Gibbs said.

Also, four of the new species, like Lasioglossum izawsum (rhymes with awesome), are so-called cuckoo bees, or parasitic bees, that have lost the morphology for nest building and pollen collecting and instead invade nests and lay their own eggs, which are then reared by the host colony.

To identify these new species, Gibbs had to familiarize himself with all the known sweat bee species in the region. For years he scoured sweat bee specimens from collections across Canada and the U.S., including the American Museum of Natural History and Cornell's Insect Collection, which has extensive holdings of sweat bees from the Northeast. A major contributor to the Cornell bee collection was the late George Eickwort, a Cornell professor who specialized in sweat bees. Gibbs named one of the new species, Lasioglossum georgeickworti in his honor.

Using DNA and morphological data, and his knowledge of bees, he was able to identify the 11 new species from the collections. A species can be defined by an inability to interbreed with other species, but since so little is known about the biology and breeding habits of these bees, DNA analysis provides the most direct evidence.

"These bees are morphologically and genetically distinct enough that you can say with confidence that they are their own species," Gibbs said.

Overall, there are some 20,000 bee species, nine of which are honeybees. Sweat bees are smaller than honeybees, nest in the ground (including lawns) and in rotten logs, and can vary in color from brown to black to dull metallic green and bright iridescent. They are mostly harmless, though people may get stung when the bees get brushed off as they lick salt on people's skin on hot days. They are also predominantly social, with some solitary and several parasitic species.

"This kind of study forms the basis of all additional studies of the biology of bees," said Gibbs. "If you want to know what is pollinating crops, you have to know what species of bees there are. This study will be used by pollination, conservation and socio-biologists," he added.

The research was supported by the Canadian Barcode of Life Network through the Natural Sciences and Engineering Research Council of Canada, Genome Canada, and the National Science Foundation.