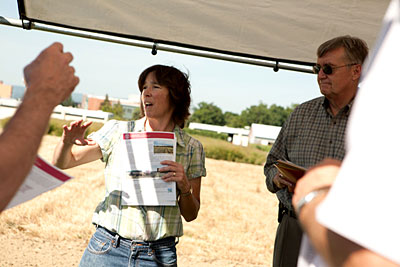 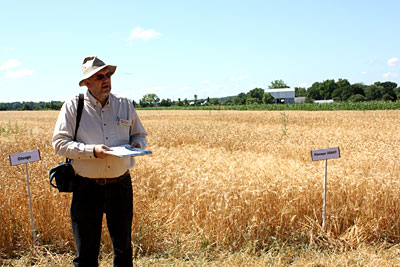 It takes 70 million years to grow a crop of fossil fuel but just 70 days to grow a crop of grass pellet fuel. That's just one of the lessons learned by students in the Belleville-Henderson Central School District in northern New York, who are helping Cornell scientists harness grass's great potential as a low-tech, local renewable energy system.

"We are incredibly impressed with how well the variety trial is growing there," said Mayton, research associate in plant breeding and genetics. "Now that these stands are mature, we are looking to see which varieties will produce relatively stable yields over time."

Cornell has about 16,000 seedlings in its plant nursery collection and is just beginning selection breeding.

Plots like those at the Belleville school -- which include switchgrass, big bluestem and other perennial grasses -- are important because they provide the opportunity to do side-by-side comparisons of different varieties. Mayton and her team have received funding from the Northern New York Agricultural Development Program and New York Farm Viability Institute to carry out the work.

Some of the grasses are shipped to a processor to evaluate how well they can be made into a biofuel feedstock. Researchers found that the Sunburst variety, for example, could not be processed into pellets, while other varieties made excellent pellets, pucks and bricks.

The trials have also proven useful for conservationists, who are using the grasses to create wildlife habitats, such as pheasant preserves.

"We are seeing a surge in interest in conservation practices by individuals and such groups as Ducks Unlimited and the U.S. Fish and Wildlife Service," said Mike Hunter, a field crops educator with Cornell Cooperative Extension of Jefferson County.

The state has about 1.5 million acres of unused or underutilized agricultural land, most of which is already growing grass. Grass biofuel production does not need to divert any of the current agricultural productivity into the energy market and could compliment the production of food or animal feed, she said.

The rainy climate has also pushed yields beyond other states undergoing crop trials, including South Dakota, Oklahoma, Iowa and Virginia.

"New York has had the highest yields of all the trials," Mayton said. "We think we can boost yields even more with breeding and selection."

Next on the researchers' agenda: evaluating mixed seedings of the various grasses, testing the effect of nitrogen on the trial varieties, and comparing the long-term sustainability and disease resistance of grass mixes to a monoculture crop.

Bergstrom said he is already on the lookout for diseases that could threaten New York's burgeoning new crop. Switchgrass smut, for instance, affects seed production and can stunt crop yield up to 50 percent.

"We are watching for initial signs of disease in New York and drawing on information from such states as Iowa and Kansas where they have grown these grasses for many years," Bergstrom said.