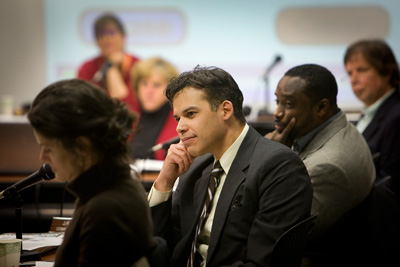 The city of Ithaca's Common Council approved a proposal Dec. 7 by Cornell University to install nets under three city-owned bridges as a suicide prevention measure. Seven council members voted for the nets, two against, and one member was absent.

"The fact that we're talking about something that has the potential of saving lives ... I think this is a proactive stance and I'm proud to be able to stand in support of it," said J.R. Clairborne, D-2nd Ward.

"We'd like to thank Ithaca's Common Council for its careful consideration and consent for the installation of means-restriction net systems," said Simeon Moss, Cornell's deputy spokesperson.

Pending site plan approval from the planning board and other requisite approvals, the university will move forward to install the net systems on both the city-owned and university-owned bridges, with the goal of starting construction this summer, Moss said. "The net systems will replace the temporary fences on these bridges. Each bridge's fencing will come down once that bridge's net system has been installed," he said.

The Cornell proposal included an agreement that the net systems will be city property but Cornell will pay for nets-related costs for 10 years. Cornell will cover costs including installation, removal of the temporary fences now on the bridges, the removal of objects from the nets, personnel training, maintenance and repair, insurance premium increases due to the nets, and insurance deductibles if any claims are sustained against the city.

As the agreement reaches its expiration in 10 years, the city can decide to leave the nets up and pay for ongoing costs itself, negotiate a new agreement with Cornell or notify Cornell to remove the nets at any time from six months before the agreement expires to three years after.

The vote was a major milestone for Cornell and other community members and organizations seeking means restriction on the bridges to prevent death by suicide from them. This effort began after six Cornell student suicides occurred between October 2009 and March 2010, three of which involved students jumping from bridges over gorges.

Cornell then requested the city's permission to install temporary fencing as an emergency measure. The city agreed, requiring Cornell to propose a long-term solution by May 31, 2011, or remove the temporary fencing. Cornell began a collaborative design process and explored three options for each bridge, some of which included vertical bars. Feedback from the community and the planning board about the importance of maintaining views from the bridges led Cornell to pursue horizontal net systems for six of the seven bridges. Designs for the Suspension Bridge call for vertical nets and removal of vertical bars now on the bridge.