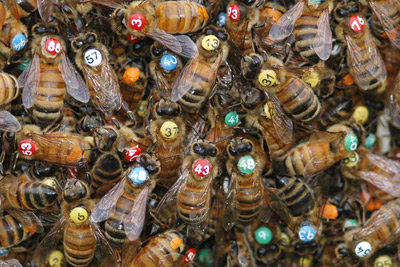 Thomas Seeley
A swarm of bees labeled for individual identification.

Swarms of bees and brains made up of neurons make decisions using strikingly similar mechanisms, reports a new study in the Dec. 9 issue of Science.

In previous work, Cornell biologist Thomas Seeley clarified how scout bees in a honeybee swarm perform "waggle dances" to prompt other scout bees to inspect a promising site that has been found. If it meets their approval, they, in turn, return to advertise the site with their own dances. Meanwhile, other scouts advertise alternative sites, creating a popularity contest among scouts committed to different sites. When one group exceeds a threshold size, the corresponding site is chosen.

In the new study, Seeley, a professor of neurobiology and behavior, reports with five colleagues in the United States and the United Kingdom that scout bees also use inhibitory "stop signals" -- a short buzz delivered with a head butt to the dancer -- to inhibit the waggle dances produced by scouts advertising competing sites. The strength of the inhibition produced by each group of scouts is proportional to the group's size. This inhibitory signaling helps ensure that only one of the sites is chosen. This is especially important for reaching a decision when two sites are equally good, Seeley said. 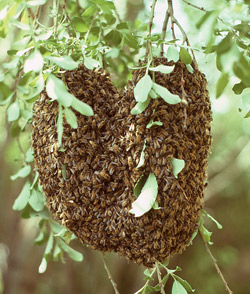 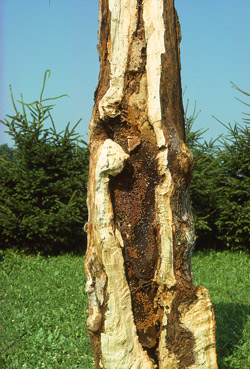 Previous research has shown that bees use stop signals to warn nest-mates about such dangers as attacks at a food source. However, this is the first study to show the use of stop signals in house-hunting decisions.

Such use of stop signals in decision making is "analogous to how the nervous system works in complex brains," said Seeley. "The brain has similar cross inhibitory signaling between neurons in decision-making circuits."

For example, when a goldfish detects the pressure wave of an approaching predator, it receives stimuli from both sides of its body. But if the pressure stimulus is stronger on the right side, brain neurons reporting from the right side will suppress the neurons reporting from the left side, which provides more clarity for the fish and helps it pinpoint the predator's location.

The study was conducted at Shoals Marine Laboratory on Appledore Island, six miles off the New Hampshire/Maine coast, where there are no big trees and no natural nest sites. The researchers brought swarms of bees to the island and offered them two equally good nest boxes. The scout bees that visited both boxes were marked with different colors.

Seeley and colleagues found that scouts that had committed to one box directed their stop signals mainly toward scouts promoting the other box.

"This analysis could not have been done without Shoals Marine Lab," said Seeley. "It's one of the very few places where there are no natural nest sites, so we can put out artificial nest sites and control and watch the whole decision-making process."

Co-authors Patrick Hogan and James Marshall of the University of Sheffield in the United Kingdom explored the implications of the bees' cross-inhibitory signaling by modeling their collective decision-making process. Their analysis showed that stop signaling helps bees to break deadlocks between two equally good sites and so avoid costly dithering.

The study was funded by the Cornell Agricultural Experiment Station, the University of California-Riverside and the U.K. Biotechnology and Biological Sciences Research Council.