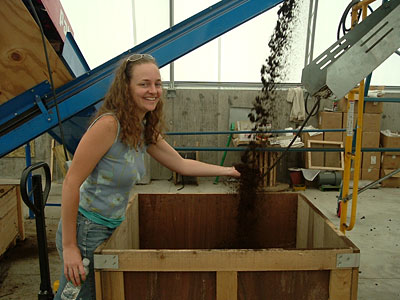 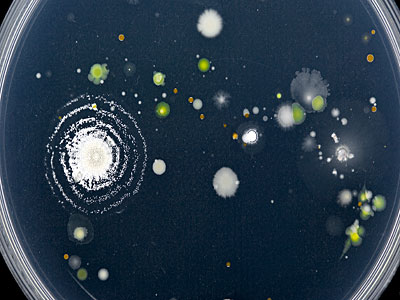 Provided
Bacteria from vermicompost extract grows on a petri dish.

Organic growers could soon have another weapon in their arsenal, courtesy of the humble worm.

Cornell researchers have found that vermicompost -- the product if composting using various species of worms -- is not only an excellent fertilizer, but could also help prevent a pathogen that has been a scourge to greenhouse growers. By teaming up with a New York composting business, they believe they have found an organic way to raise healthier plants with less environmental impact.

Building on previous research conducted by Professor Eric Nelson's research group in the Department of Plant Pathology and Plant-Microbe Biology, Ph.D. student Allison Jack has shown that beneficial microbes in vermicompost can colonize a seed's surface and protect it from infection by releasing a substance that interferes with the chemical signaling between the host and the pathogen.

"We know the microbes are actually adding something the zoospores don't like," Jack said. "Now we just have to find out what it is."

Eric Carr, a master's student in Nelson's lab, is focusing on the suppressive qualities of vermicompost on a different stage of the life cycle of Pythium aphanidermatum, a pathogen whose mobile spores infect seedlings, causing them to "damp off," or wither, shortly after germination. The research, he said, helps contribute to opportunities to turn waste products like manure into important disease-suppressive soil amendments.

"At some point in our lives, we're going to have to start using these types of natural resources and use them more efficiently; when that times comes, we'll have a better idea of how it works," Carr said.

Certain composts can suppress diseases, research has shown, but what is still unknown is which of the thousands of undescribed microbes in healthy compost are responsible for suppressing which diseases.

Another challenge in identifying suppressors and harnessing them is the variability of different composts.

To overcome this issue, Jack has teamed up with Tom Herlihy, who produces 2.5 million pounds of vermicompost a year through his Avon, N.Y., company, Worm Power. Because his dairy manure feedstock is regular and the process controlled, Herlihy's end product is highly consistent, a quality that's good for growers and for scientists like Jack.

Most seeds are treated in this country with chemicals," Herlihy said. "If we know our vermicompost can suppress Pythium, wouldn't it be nice if we could come up with a vermicompost-based solution, rather than a chemical one?"

There could also be economic benefit if the Environmental Protection Agency, for example, allows Herlihy to market his product as a biopesticide.

A related project at Cornell focuses on vermicompost's organic fertilizing capability. Horticulture assistant professor Neil Mattson was recently awarded a $203,000 grant from the U.S. Department of Agriculture to study how organic growers can incorporate vermicompost into their potting mixes for better nutrient management. The three-year research project will begin this spring.

Aaron Munzer is a freelance writer in Enfield, N.Y.