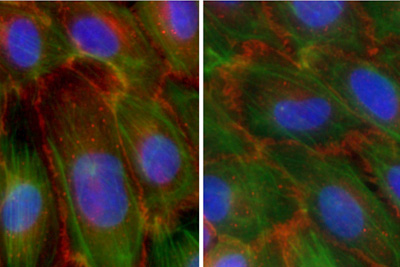 As inevitable as the wrinkling of skin with age is the hardening of the blood vessels -- a condition called atherosclerosis that is often blamed for heart disease.

New Cornell research offers a clue into the underlying causes of atherosclerosis in terms of how the cells that line the blood vessels, called endothelial cells, behave as the vessels stiffen with age. The researchers hope these insights could lead to more targeted drug therapies for the prevention of atherosclerosis.

"One of the things we wanted to do was understand how aging is linked to atherosclerosis, and how the mechanism of vessel stiffening plays into this link," said Cynthia Reinhart-King, assistant professor of biomedical engineering and lead author of the Science Translational Medicine study published online Dec. 7 and to be featured on the journal's cover.

The researchers showed that by changing the behavior of endothelial cells in the hardened vessel, without making the vessel any less stiff, they could reduce the effects of aging on vessel health. In other words, they could dull the vessels' inflammatory response to stiffening by, in essence, tricking the cells in the blood vessels into thinking the vessels were not stiff.

Atherosclerosis starts when excess cholesterol gets trapped underneath blood vessel walls, setting off an inflammatory response. The endothelial cells recruit white blood cells to the site to digest the cholesterol; both then get trapped in the area, forming plaques that clog the vessels.

A class of medications called statins (e.g., Lipitor and Crestor) work by changing how the liver metabolizes cholesterol and lowering the total amount of LDL cholesterol in the blood. The drugs are effective, Reinhart-King said, but they have side effects, and they seem to be most effective in patients who already have atherosclerosis and not as a preventative treatment.

"[But] if you just prevent the cholesterol from getting under the vessel wall to begin with, you stop the whole process," Reinhart-King said.

They did experiments by making "vessels" of varying stiffness out of a commonly used biomaterial. They tuned the stiffness of each biomaterial to exactly mimic the stiffness of vessels at various states of aging, and they seeded them with endothelial cells to measure their permeability.

The molecules that regulate the pulling apart of the cells, or their contractility, include Rho and Rho-associated kinase (ROCK). When the cultured hydrogels were treated with a drug called Y-27632 (which has not yet reached clinical trials) that inhibits ROCK, the gaps between the cells tended to close, which prevented more plaque buildup.

As it turns out, statins like Lipitor and Crestor, while FDA-approved to lower cholesterol, also appear to inhibit ROCK, and so might benefit high-risk patients as demonstrated in the Cornell experiments. The researchers also hope that their discoveries could lead to better therapies for preventing atherosclerosis by counteracting the effects of vessel stiffening before they do irreversible damage.

The research was supported by the American Heart Association, American Federation for Aging Research, National Institutes of Health and L'Oreal USA Fellowship for Women in Science.