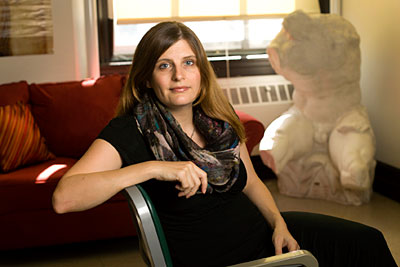 Jason Koski/University Photography
Professor Verity Platt in her office with a reproduction of the classical Belvedere Torso.

"It was discovered during the Renaissance and was influential on Michelangelo's paintings for the Sistine Chapel," said the Cornell professor of classics and history of art. "Unlike many surviving ancient sculptures, it's an example signed by an artist [Apollonios] we'd never have heard of otherwise."

Platt, who specializes in ancient theories of representation and on the relationship between image and text, is one of the lead researchers on the Ancient Lives Project, which aims to develop a new approach to the transmission and reception of classical poetry. She will act as a consultant on visual culture throughout the project.

The European Research Council has granted €1.125 million (about $1.47 million) for the project, including support for two years of research (2012-13) and funding for Ph.D. students and postdoctoral fellows.

The researchers will explore how listeners and readers imagined the lives of Greek and Roman poets, when the true facts of their lives were unknown or forgotten; and the relation of those perceptions to classical poetry's shifting social and cultural value.

"We want to explore how the stories people told about ancient poets' lives might serve as evidence for the ways that they read and responded to their works in different periods and places," Platt said. "The biographical reception and reinvention of poets by each generation is a process which began in antiquity and extends right up to the modern day."

She questions why, for example, "some biographies claim that Homer was blind, that Sappho committed suicide due to unrequited love, or that Virgil was a magician. Such stories are rarely based in fact, but rather than dismissing them as historically inaccurate, it is more interesting to ask what they might tell us about how the poets were perceived."

The Ancient Lives Project will result in three major conferences, a website providing documentation and resources for scholars, and publications including an edited volume from each conference. The principal investigator is Barbara Graziosi, a professor of classics and ancient history at Durham University in the U.K.

A doctoral student based in Durham will visit Cornell for a year to work on portraits of poets with Platt and history of art professor Annetta Alexandridis.

"The project website will gather all the evidence for the lives of ancient poets, both textual and visual, and will collect extant ancient portraits," Platt said.

The project offers important links between Cornell and classics departments in the U.K., including Durham and Warwick universities, she added.

Platt is conducting parallel personal research "on the lives of ancient artists, a fascinating situation if you consider all the literary material relating to artists whose works have been lost," she said. "Much of the history of ancient art has been based on literary evidence for 'old masters,' despite the fact that the majority of surviving works were made by anonymous craftsmen."

She will give a lecture on artists' lives Jan. 9 at York University in the U.K. She has researched ancient cult statues, such as the Athena Parthenos and Olympian Zeus, for her book "Facing the Gods" (2011, Cambridge University Press). Like most original classical Greek sculptures, neither survives.

"Both were attributed to Phidias, and attracted all kinds of controversial tales," she said. "The role of the artist in making images of the gods is problematic. Is it true that Phidias concealed his own portrait in Athena's shield? Or that he stole gold intended for her statue? What might such stories tell us about attitudes to sacred forms of representation in antiquity?"

Once published, the project research "will be an important resource for anyone using these texts. There will be a proliferation of work using what we're going to make accessible," Platt said.