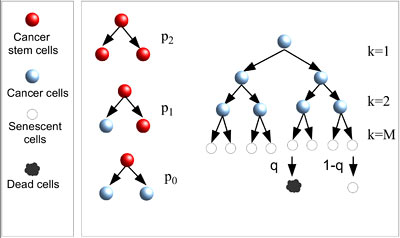 Since cancer cells grow indefinitely, it is commonly believed that senescence (when cells can no longer duplicate) could act as a barrier against tumor growth and potentially be used as a way to treat cancer. A new study, however, shows that cell senescence occurs spontaneously in malignant skin cancer (melanoma) cells but does not stop their growth, which is sustained by a small population of cancer stem cells.

The results, published Jan. 19 in the open-access journal PLoS Computational Biology, explain why it is difficult to treat cancer cells by inducing senescence alone. The work is a collaboration among James P. Sethna, professor of physics at Cornell; first author Caterina A.M. La Porta, a cancer biologist at the University of Milano, Italy; and Stefano Zapperi, a physicist from the National Research Council of Italy.

The work explores the relationship between melanoma and senescence, the normal process where cells decline and eventually stop reduplicating after reaching maturity. The investigators followed the long-term evolution of melanoma cell populations, monitoring the number of senescent cells. After three months, growth slowed and most of the cells turned senescent; however growth did not stop and eventually resumed its initial rate until the senescent cells had almost disappeared.

Although a large fraction of cancer cells are susceptible to senescence, the researchers conclude that inducing senescence is unlikely to provide a successful therapeutic strategy because these cells are irrelevant for tumor growth. However, the indirect evidence of cancer stem cells in melanoma may enable the development of new methods to treat specific kinds of cancer. The challenge will be in the strong resistance to drug-induced senescence that would be found in the stem cells. Along this line of research, treatment of tumors would focus on targeting only these cancer stem cells, rather than every single cancerous cell.

Sethna's work on the study was funded by the Physical Sciences Oncology Center at the Cornell Center on the Microenvironment and Metastasis.