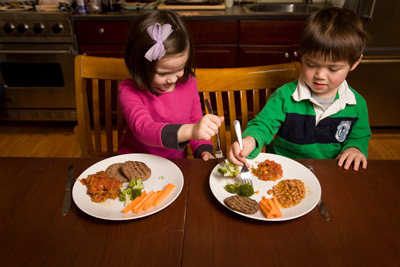 Jason Koski/University Photography
The study found that children are tempted by plates with seven different items and six colors while adults tend to prefer only three items and three colors. The findings could be used by parents of picky eaters to encourage their children to eat more nutritionally diverse diets by introducing more colors to their meals.

Just because you think a food arrangement looks appetizing doesn't mean it's appealing to kids: Children are most attracted to food plates with seven different items and six different colors. Adults, on the other hand, tend to prefer only three items and three colors, reports a new Cornell study.

"What kids find visually appealing is very different than parents," concluded Brian Wansink, the John S. Dyson Professor of Marketing in Cornell's Dyson School of Applied Economics and Management. "Unfortunately, when we parents plate food for kids, we do it in a way that is appealing to us and not to them. Our study shows how to make the changes so the broccoli and fish look tastier than they otherwise would to little Casey or little Audrey."

The study is published in the January issue of Acta Paediatrica (101:1).

Wansink and co-authors Kevin Kniffin and Mitsuru Shimizu, Cornell postdoctoral research associates, and Francesca Zampollo of London Metropolitan University presented 23 preteen children and 46 adults with full-size photos of 48 different combinations of food on plates that varied by number of items, placement of entrée and organization of the food. 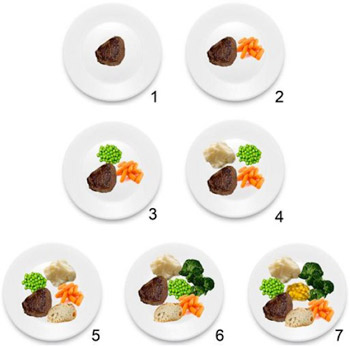 In an experiment, Cornell researchers find that children are more attracted to plates of food full of color.

"Compared with adults, children not only prefer plates with more elements and colors, but also their entrees placed in the front of the plate and with figurative designs," said Wansink, who suggests such designs as placing bacon in the shape of a smile along the lower part of a plate or arranging peas in a heart shape.

"There are lots of prefabricated partitioned plates that parents can buy in stores for young children, but our findings suggest that the typical partitioning into three segments is mainly a reflection of adult preferences," Kniffin added. "While plates that are designed with partitions aren't necessary for preparing a diverse set of foods, Japanese style bento boxes would match better with our findings since they tend to have significantly more pockets."

"While much of the research concerning food preferences among children and adults focuses on 'taste, smell and chemical' aspects, we will build on findings that demonstrate that people appear to be significantly influenced by the shape, size and visual appearance of food that is presented to them," Wansink said.

Added Kniffin: "Future studies will need to test what kind of upper limit exists on the diversity of foods that children appear to prefer, but the preliminary findings suggest more evidence that young children aren't just 'little adults.' In other words, we shouldn't assume that they share our views of the world."