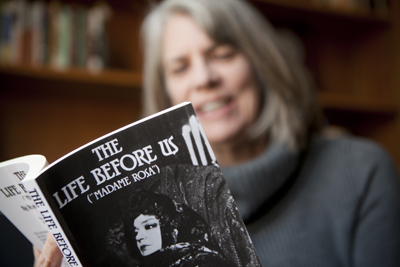 The summer reading for new students entering Cornell in the fall will be Romain Gary's novel "The Life Before Us," the story of an illiterate Arab boy and the Holocaust survivor who raised him, Vice Provost for Undergraduate Education Laura Brown announced.

The lectures will reflect a wide range of topical, academic and intellectual avenues of investigation generated by the book, while showcasing Cornell's academic diversity. Students, faculty and staff also will discuss the book in small group seminars.

Published in Paris in 1975, "The Life Before Us" follows the relationship between the boy, Momo, and Madame Rosa -- a Jewish ex-prostitute who survived Auschwitz -- and the last months of their life together in the Parisian immigrant slum of Belleville. Madame Rosa makes a living by raising the children of other prostitutes, and as her health declines Momo must find ways to provide for them all.

"Momo's exuberant and often hilarious view of his world provides a surprising affirmation of the possibilities for wisdom from the perspective of innocence, and of the endurance of love and beauty in the face of suffering," Brown said.

"The Life Before Us" is admired for its invention of a new literary language, an informal representation of direct speech that gives immediate access to experiences that escape description, and to an extraordinary emotional intimacy, Brown said. The innocent Momo's failures of comprehension and his unintentionally comic misunderstandings celebrate the uniqueness of the individual while creating a persuasive portrait of intercultural coexistence.

Topics for discussion and exploration inspired by the book include the Arab-Israeli conflict and Muslim-Jewish relations, the Holocaust, the role of religion in the modern world, immigration and global geographical mobility, social inequality and poverty, sexual identity, medicine and modern science, and the role of popular speech in negotiating cultural divisions.

Gary (1914-1980) was one of the most respected French novelists of the 20th century. As Émile Ajar, the last of several pseudonyms he adopted, Gary published "The Life Before Us (La vie devant soi)," which earned him his second Prix Goncourt, normally awarded only once to a single author. The novel, translated into English by Ralph Manheim and published first as "Momo" in 1978 and then "The Life Before Us" in 1986, has been translated into 21 other languages. It also was adapted for a film starring Simone Signoret, "Madame Rosa," which won the Academy Award for Best Foreign Film in 1977.

Books for the reading project are suggested by the Cornell community, and finalists are chosen and then read and discussed by a representative university committee before a final selection is made. Other books shortlisted for consideration this year were "Cat's Cradle" by Kurt Vonnegut Jr. '44; "The Quiet American" by Graham Greene; and "Caleb's Crossing" by Geraldine Brooks.

Students will receive a copy of the book and study questions in their orientation packages. The reading project also is supported by a website with a study guide and additional resources at http://reading.cornell.edu.