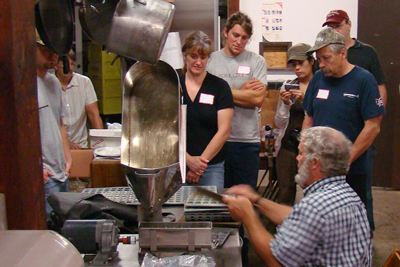 The secret to success for maple syrup producers may lie in the science of sanitation.

Simply changing taps and tubing or using special spouts could double the amount of sap seeping from New York's maple trees, according to Cornell experts who have spent six years researching the topic.

The buildup of bacteria and yeast inside tap holes can cause taps to dry up. Microbes can be pulled into the tapholes from old tubing when the tree develops a natural vacuum during freezing temperatures, which can suck sap back into trees. Check valve spouts can prevent this by employing small balls that roll back and forth inside the spout, blocking the flow back into the tree.

Through workshops and webinars, Childs and his colleagues are advocating sanitation techniques among New York's maple producers. The results have been increased sap yields and expanded production for many, according to Mike Farrell, director of Cornell's Uihlein Maple Forest in Lake Placid. The average volume of sap per tree varies from 10 to 20 gallons per tap, and it takes about 40 gallons of maple sap to produce one gallon of pure maple syrup.

"The research Steve Childs has done has had a huge impact on being able to tap two to three weeks earlier in the season without worrying about bacteria contaminating the tap hole," Hill says.

Chuck Winship is one producer who has benefited. He makes more than 1,000 gallons of syrup annually at his Sugarbush Hollow farm in East Springwater, N.Y., and said Cornell sanitation techniques helped make the 2011 season the best ever for sap quantity and quality.

Winship hopes history will repeat itself in 2012. Hill agrees, but is hesitant to make any predictions.

"The old timers say you never get two good years back-to-back," Hill said. "We are weather dependent. The season will be determined by what happens for a few short weeks in February and March."

"The moderate, early, temperatures and limited snowfall this winter will allow most producers to more easily work in their sugarbushes, and I suspect we will eventually get the winter weather necessary to sweeten the sap and cause the flow," adds Peter Smallidge, director of the Arnot Teaching and Research Forest in Van Etten, N.Y.