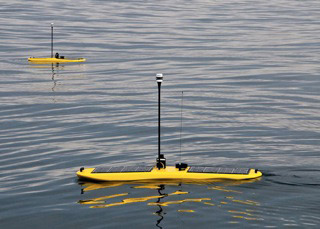 Provided
Wave Gliders can be released off the coast and operate along survey lines running perpendicular to the coast.

Oceanographer Chuck Greene envisions a day when he will be able to observe the ocean the way a meteorologist observes the weather -- with continuous streams of data that allow him to see changes as they happen and predict future impacts on marine animal populations and ecosystems.

That day may be coming soon, thanks to a revolutionary ocean-observing tool he is helping to optimize, one capable of collecting and transmitting ecosystem data to his desktop in real time.

Invented by Liquid Robotics Inc., the Wave Glider has drawn a lot of interest from the U.S. Navy for acoustic surveillance applications. Greene is working with Liquid Robotics to instrument the gliders to improve and greatly reduce the costs of fish and marine mammal surveys, which currently depend on manned research vessels. 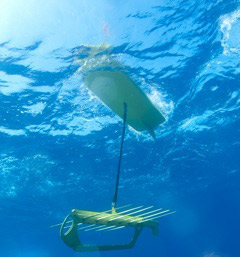 Provided
Collecting acoustic data with an echo sounder, each Wave Glider can cover about 12 miles a day.

At around $25,000 a day in ship costs for cruises that can last as long as 60 days, such surveys have become prohibitively expensive. This has compromised the geographic and temporal coverage of the surveys, as well as the quality of data sets that can cost more than $1 million per year to collect.

"Some of the things we really want to know, such as seasonal migration and feeding patterns, we can't find out," Greene said. "There are a lot of things we sacrifice knowing about the animals because we really don't know where they are half the time."

The Wave Gliders would be released off the coast and operate along survey lines running perpendicular to the coast. Collecting acoustic data with a custom echo sounder developed by another partner, BioSonics Inc., each Wave Glider would cover about 12 miles a day.

Controlled via satellite by scientists on shore, a fleet of such gliders could continuously monitor the same area year-round that a ship currently surveys once a year or every other year by methodically "mowing the lawn" as it makes its way down the coast.

"We are entering a new era in fisheries and conservation oceanography," Greene said. "We used to generate our hypotheses based on very limited observational data and then go out on research vessels with very rigid cruise plans to test them. We still do that to a large extent, but soon we hope that a greater observational presence in the ocean will enable us to monitor how ecosystems and their populations are changing in real time. Then we will be able to change our cruise plans on the fly and adaptively survey and sample the ocean to test our hypotheses. Reliable ocean and fisheries forecasting is on the horizon."

While the instrumented Wave Gliders could cost more than $100,000 each until they go into mass production, they still represent a great value, Greene said, since 50 of them would cost the same as two ship surveys, but would provide much richer data sets.

"Potentially these Wave Gliders could be at sea for months at a time," Greene said. "Their maintenance costs would also be very low. Payback time is pretty quick."

Preliminary tests funded by the National Science Foundation were conducted last year, with promising results. This year, Greene and his partners are planning to fit the Wave Gliders with a larger transducer, enabling them to work at one of the lower frequencies required for fisheries research. Assuming this winter's tests are successful, they plan to conduct their first fishery acoustic surveys with the National Marine Fisheries Service off the West Coast next summer.

Stacey Shackford is a staff writer in the College of Agriculture and Life Sciences.