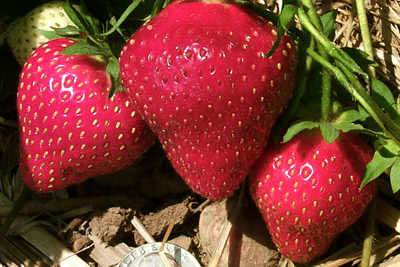 Strawberry lovers will soon have Herriot -- a sweet treat featuring a flavor reminiscent of historic varieties and a slight pineapple overtone -- to look forward to, thanks to a new variety of large, heart-shaped fruit developed by Cornell.

"Herriot is one tough plant," said Weber. "Many of our trials are in the worst possible soil conditions, and Herriot is always one of the last varieties standing. And it tastes good, too."

"Herriot really draws the eye because of the nice shine on the fresh berries. That makes them very attractive to farm-stand and pick-your-own customers," Weber said.

In trials and with commercial growers in New York, Massachusetts, Illinois, Minnesota and Ontario, Herriot yielded as much as 60 percent more than Jewel, the predominant midseason variety for perennial matted-row production that was also developed at Cornell.

It also shows good resistance to common leaf diseases and holds up well to summer renovation stress (the mowing, fertilizing and loosening of soil to prepare for next year's bed, which can be stressful to the plants), allowing for wider adaptation to variable soils, Weber said.

In development for 12 years, the variety is named for the one of Weber's favorite authors, James Herriot, the author of "All Creatures Great and Small."

Weber's small fruits breeding program at Cornell is focused on developing improved strawberry and raspberry varieties for New York growers. Previous releases -- including L'Amour and Clancy strawberries and Prelude, Encore and Crimson Giant raspberries -- have shown wide adaptation throughout New England, the mid-Atlantic states and the Midwest, as well as temperate regions of Europe.

Weber worked closely with the Cornell Center for Technology Enterprise and Commercialization to license the variety, and a patent will be filed later this year.

Craig Cramer is a communications specialist in horticulture.