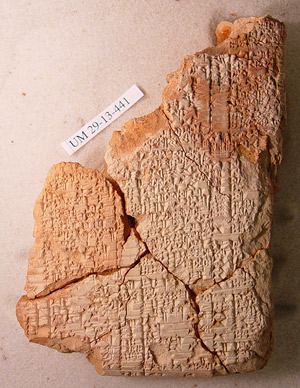 With the permission of the University of Pennsylvania Museum of Archaeology and Anthropology
This is one of the cuneiform tablets that Jonathan Tenney, assistant professor of ancient Near Eastern studies, addresses in the new book, "Life at the Bottom of Babylonian Society: Servile Laborers at Nippur in the 14th and 13th Centuries, B.C."

They got married, had children, made beer. Although they lived 3,500 years ago in Nippur, Babylonia, in many ways they seem like us. Whether they were also slaves is a hotly contested question which Jonathan Tenney, assistant professor of ancient Near Eastern studies, addresses in the newly released "Life at the Bottom of Babylonian Society: Servile Laborers at Nippur in the 14th and 13th Centuries, B.C." (Brill).

The book is based on Tenney's dissertation at the University of Chicago, for which he received the 2010 Dissertation of the Year Award by the American Academic Research Institute in Iraq.

Some previous scholars identified the 8,000-strong group of government workers as temple employees. "But the problem is the records included food for little babies, which didn't make much sense," says Tenney, who joined the Cornell faculty this past fall. "And sometimes the workers ran away, and when they were captured they were put in prison."

Tenney translated more than 500 cuneiform tablets in his hunt for the truth about these weavers, musicians, "water sprinklers" and others in service to the governors of Nippur. By using quantitative measurements to create demographic data, he was able to look at population dynamics, family structure and the legal status of this population. He then compared the Babylonian group's demography with other better-studied groups, such as those in Roman Egypt, medieval Tuscany and on American slave plantations.

"Whether they're slaves is not what's valuable to me about this work," Tenney says. "The point is we don't have an historical demography of Babylonia at all. We don't even know how many people were living there at any given time." His book is the most detailed study yet done of any population group in Babylonia.

The picture Tenney draws of family life in this servile population is surprising in its mundanity. By far the majority of households were nuclear, husband-wife-children or a single parent with children, usually a widow, instead of slaves living together or in groups. Tenney was able to track some families for as long as 32 years.

"As you start to work with slavery you realize how many misconceptions we have," he says. "Being a slave doesn't necessarily mean you can't have a family life and raise children and develop your own individual culture and identity. I think that slavery and freedom exist on a continuum of varying degrees." He left it to his readers to decide where the Babylonians about whom he wrote fit on that continuum.

The tablets Tenney translated were excavated by scholars from the University of Pennsylvania in the 1890s in what is now Iraq; they are some of the earliest Babylonian texts ever found. Tenney will publish the raw data from his research in the forthcoming "Middle Babylonian Administrative and Legal Documents Concerning the Public Servile Population of Nippur."