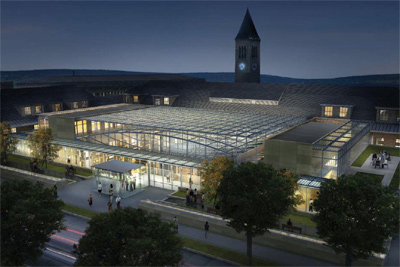 Located between Goldwin Smith Hall and East Avenue, the new humanities building will provide some 33,250 net square feet of new space, including a 330-350 seat auditorium, the largest on the Arts Quad.

On Jan. 19, the Buildings and Properties Committee of the Cornell Board of Trustees unanimously approved relaunching the design phase of the new humanities building, the first at Cornell in more than 100 years.

The design process for the building was put on hold in 2008 after the initial schematic designs were produced. Plans now call for completing the design development phase this year, completing the bidding process and groundbreaking in 2013, and finishing construction by December 2015.

"We're thrilled to have the building's construction costs fully funded through philanthropy," said G. Peter Lepage, the Harold Tanner Dean of the College of Arts and Sciences. "We deeply appreciate the amazing generosity of the Cornell families who have made this building possible."

The new building will provide much needed space for the increase in the college's humanities faculty, which is partly a result of the college's success in the faculty renewal hiring initiative, as well as a result of the overall expansion of the humanities at Cornell in the last 100 years. The building, which will provide 33,250 square feet of new programmable space, will include about 124 modular office-sized spaces that can be used as offices or meeting, conference and seminar rooms.

"Although we've met our initial target, we still need to raise funds for future operations of the building, so those who want to support the project still have opportunities to give," noted Lindsay Ruth, associate dean of alumni affairs and development in the College of Arts and Sciences.

Approval of the humanities building construction couldn't have come at a more welcome time for the local economy, according to David Marsh, president of the Tompkins Cortland Building and Construction Trades Council. "Recession cycles tend to hit the construction industry a little later," he explained, "so we're really feeling it now. We're experiencing higher than normal unemployment levels for our union membership."

That membership numbers some 500 in the Ithaca region, and Marsh anticipates at the peak of construction the humanities building project will employ about 100 of the union's laborers, sheet metal workers, carpenters, painters, masons, electricians and plumbers. "A building like this means a lot to the local economy," said Marsh. "It provides a real boost."

And because the building is planned to be LEED Platinum certified and the LEED certification process gives points for local and regional materials, purchasing will focus as much as possible on local and regional suppliers, said Gary Wilhelm, project director with Cornell Capital Projects and Planning.