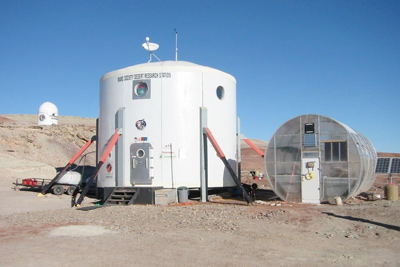 Provided
Six volunteers will live for four months in Hawai'i in a habitat similar to the Mars Desert Research Station, pictured here; researchers will study their food preparation, menu fatigue and other issues related to diet and nutrition.

Astronauts on a mission to Mars will need much more than freeze-dried ice cream to sustain them, and researchers at Cornell are working to determine the best way to keep them well nourished during their three-year journeys and four-month stays on the Red Planet.

To do so, they are seeking volunteers to spend four months in a simulated Mars habitat on the barren lava fields of Hawai'i.

Jean Hunter, associate professor of biological and environmental engineering, and Bruce Halpern, professor of psychology and neurobiology and behavior, have teamed up with Kim Binsted, associate professor of information and computer science at the University of Hawai'i-Manoa, to conduct a $947,000, three-year NASA study on the diets of the six volunteers, who will be required to live and work like astronauts, including suiting up in space gear whenever they venture outdoors. 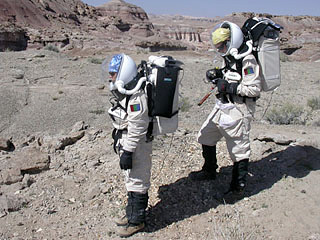 Provided
The six crew members will have to suit up whenever they venture out of their four-month "home."

One of the biggest food challenges astronauts face is menu fatigue, Hunter said. They not only tire of eating foods they normally enjoy but also tend to eat less, which can put them at risk for nutritional deficiency, loss of bone and muscle mass, and reduced physical capabilities. Moreover, all foods decline in nutritional quality over time, and only a few of the many available astronaut foods have the three-to-five-year shelf life required for a Mars mission.

On a landed mission, however, the planet's gravity would make cooking – and perhaps gardening – possible, which would give the astronauts more food variety and relieve menu fatigue, Hunter said.

She will test this theory during the Hawai'i study. The research team will assess the palatability of available instant foods and food prepared by the crew, and determine whether food preferences change over time. They will also measure the time, power and water required for meal preparation and cleanup for instant and crew-cooked foods, and compile recipes and cooking tips.

In addition, Hunter will study physical changes that astronauts undergo related to their sense of smell, which affects taste and appetite. In micro-gravity environments, food and fluids don't get pulled to the feet, and nasal passages swell, compromising smell. Bed-ridden patients on Earth experience a similar response, which the researchers are studying in a series of experiments on bed-rested subjects at the NASA Flight Analogs Research Center in Galveston, Texas.

The Mars simulation experiments will begin this summer with a four-day workshop at Cornell's School of Hotel Administration, during which the selected volunteers will learn to plan and cook interesting, varied meals from shelf-stable ingredients, track their food intake and perform olfactory tests on each other.

The researchers are hoping to attract highly educated volunteers, including scientists and engineers, with the enticement of working on their own personal research projects while in Hawai'i. The application deadline is Feb. 29.