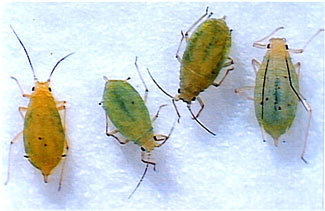 Provided
The researchers have identified protein biomarkers that allow them to determine whether an aphid will efficiently transmit disease or not.

A team of international researchers is working to tackle the global problem of plant viral diseases that are spread by insects, thanks to close to $1 million from the National Science Foundation (NSF) and the Bill & Melinda Gates Foundation.

The team, headed by Stewart Gray, a U.S. Department of Agriculture-Agricultural Research Service (USDA-ARS) research plant pathologist and Cornell professor of plant pathology, and Michelle Cilia, a USDA-ARS research molecular biologist, received a three-year, Basic Research to Enable Agricultural Development (BREAD) grant of $868,896 to develop protein biomarkers that distinguish insect populations capable of transmitting disease from those that do not.

"One problem with managing viral diseases is there is no cure," said Gray, of the plant diseases that cause an estimated $60 billion in damages worldwide each year. "To control them, you have to develop a resistant crop, or you have to prevent the vector from feeding on and infecting the plant."

Another challenge is that within insect species, such as aphids and whiteflies, that spread these viruses, researchers find populations vary widely in how efficiently they spread a virus. That's because mutations or changes in genes alter specific proteins that viruses use to move through an insect. Slight changes in a gene can drastically alter the way a protein functions, Cilia said.

The researchers have identified protein biomarkers that allow them to determine whether an aphid will efficiently transmit disease or not.

"Finding these biomarkers for virus transmission is an exciting major breakthrough," said Cilia. In medicine, for example, biomarkers for breast cancer and prostate cancer are rare success stories, Cilia added. The researchers are now trying to validate the aphid biomarkers in a range of vector insects.

If successful, the researchers hope to develop a test kit that can be used in the field to identify if an insect population is likely to be a virus vector. Once identified, growers can then target particular insects with pesticides at a certain time in their lifecycle. Currently, growers must spray crops indiscriminately to prevent disease outbreaks.

"Prophylactic spraying of crops to eliminate all potential vectors is not efficient from an economical or environmental standpoint," said Gray.

The international team also includes researchers from the University of Washington in Seattle, the USDA-ARS U.S. Vegetable Laboratory in Charleston, S.C., and the International Institute of Tropical Agriculture in Nigeria and Cameroon.

BREAD seeks to partner advanced research expertise with the developing world and is jointly funded by the NSF and the Bill & Melinda Gates Foundation.