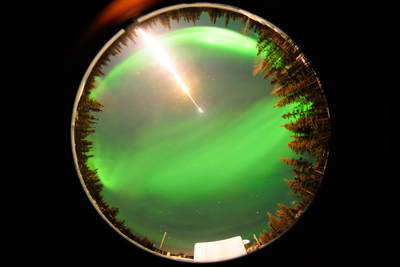 Ryuho Kataoka/Tokyo Institute of Technology
An all-sky image during the rocket launch taken by an automated camera near the entrance gate of the Poker Flat Research Range.

As the brilliant colors of the aurora borealis, or northern lights, delights skygazers, Cornell researchers are discovering how their physics affects satellite signals here on Earth.

The project — the Magnetosphere-Ionosphere Coupling in the Alfven resonator (MICA) mission — involves 60 scientists, engineers, technicians and graduate students from several institutions and NASA. From Cornell they include Powell, principal investigator for the mission; David Hysell, co-investigator and professor of earth and atmospheric sciences; Robert Miceli and Brady O'Hanlon, graduate students in the fields of electrical and computer engineering; and Mark Psiaki, professor of mechanical and aerospace engineering. 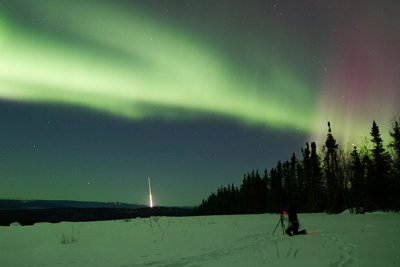 Casey Thompson/Spaceweather.com
A photographer captures the aurora borealis as the rocket launches.

"We're investigating what's called space weather," said Powell, who along with Hysell, Miceli and O'Hanlon, has been stationed at the rocket launch site, 30 miles north of Fairbanks, since the end of January. "Space weather is caused by the charged particles that come from the sun and interact with the Earth's magnetic field. We don't directly feel those effects as humans, but our electronic systems do."

These include global positioning systems; one of the scientists' main goals is to investigate the effects of space weather on GPS satellites.

The project, in its third and final year, was initiated by the late Paul Kintner, Cornell professor of electrical and computer engineering, who served as the mission's principal investigator during its proposal and early development phases. 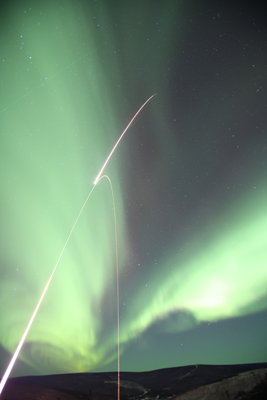 Craig Heinselman/SRI International
The first stage of the rocket falls back down to Earth, while the second stage and payload continue upward through and above the aurora.

The rocket is a 46-foot Terrier-Black Brant model that was sent arcing through the aurora 202 miles above Earth, sending a stream of real-time data back before landing 200 miles downrange.

Instruments on board sampled electrons in the upper atmosphere that are affected by a form of electromagnetic energy called Alfven waves. These waves are thought to be a key driver of "discrete" aurora — the typical, well-defined and famously shimmering lights that stretch across the horizon.

The rocket payload separated into two parts once launched. One extended antennae to measure electric fields generated by the aurora. Other antennae and sensors measured electrons and ions interacting with the Earth's magnetic field. In this period of high sun activity, called solar maximum, gases from the sun are likely interfering with GPS transmissions, satellite Internet and other signals.

"We are becoming more dependent on these signals," Powell said. "This will help us better understand how satellite signals get degraded by space weather and how we can mitigate those effects in new and improved GPS receivers."