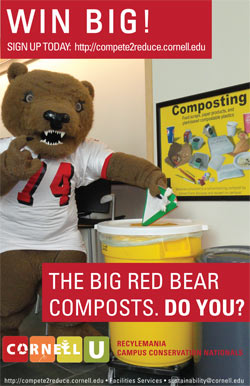 Spring Buck, Kelly Graham and Lisa Hogarty
Posters like this can be found around campus to promote sustainability through Recyclemania and the Campus Conservation Nationals.

Cornell's participation in two national contests -- one to recycle and compost campuswide and another to conserve energy and water in residence halls -- mix fun with raising awareness about campus conservation.

The Compete to Reduce campaign includes Recyclemania, a competition between hundreds of U.S. and Canadian universities to see which can reduce its waste stream most by composting and recycling Feb. 5 to March 31. The other contest is Campus Conservation Nationals, a countrywide competition between and within schools to conserve the most water and energy; this year, Cornell will only compete internally, among buildings that house students, Feb. 6 to 26.

For Recyclemania, over an eight-week period, colleges across the United States and Canada report the amount of recycling and trash collected each week. They are ranked in various categories based on who recycles the most per capita, schools that have the best recycling rate as a percentage of total waste, and schools that generate the least amount of combined trash and recycling; trucks are weighed on scales. Cornell competed in Recyclemania for the first time last year and came in 85th in the Per Capita Classic category out of 630 schools.

"Recyclemania helps engage people and provides a fun opportunity to raise awareness about recycling and composting," said Spring Buck, operations manager at Cornell's recycling and solid waste unit. Last summer, Buck led Cornell's transition to single-stream recycling after the county began to combine all recyclable materials into one waste stream and no longer separated paper from other waste.

For the Campus Conservation Nationals, all North and West Campus residence halls, Greek houses, program houses and co-ops will compete against each other. Nationally, colleges and universities will combine their totals to try and save 1 gigawatt of energy.

Participating institutions will use the Lucid Dashboard system, an interactive way to post energy and water use from building meters. Students will be required to read from 85 meters and post results on the dashboard where they can be checked anytime for any building.

Contest organizers have also developed an ad campaign with a series of posters featuring the Big Red Bear engaged in such conservation activities as turning off a power strip, taking a shorter shower and doing laundry with cold water.

"When environmental groups around campus preach sustainability and behavior change, it's hard to see the results," said Katherine Fink '12, the energy conservation intern at Cornell's Sustainability Office and a lead organizer of the Cornell contest. "But in this type of competition, you can see your actions make a difference, and it empowers people to make changes in their behavior."