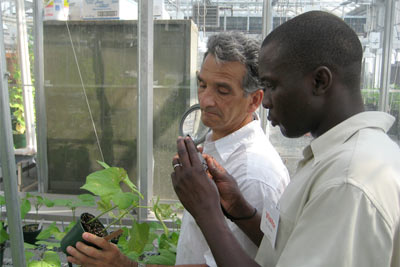 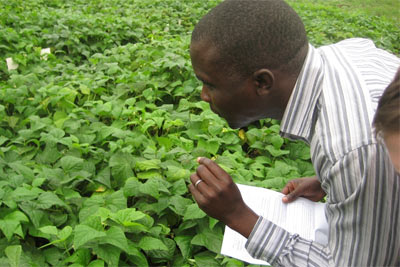 Provided
Charles Wasonga, Ph.D. '10, evaluates the performance of green beans at lower altitudes in Kenya and selected those that combined heat tolerance and rust resistance. He is a postdoctoral fellow with the International Centre of Insect Physiology and Ecology in Mbita Point, Kenya.

Green beans are Kenya's most important horticultural export, earning farmers five to 10 times more than the dry beans they traditionally grow. However, there are two significant barriers to the expansion of this lucrative market: the varieties available are sensitive to high temperatures during flowering and susceptible to the common bean rust fungus.

"To consider sub-Saharan Africa a region only for subsistence farming is to overlook opportunities for small-holder growers to produce crops with much higher values," he added. "The ability to expand green bean production into marginal areas at lower altitudes would provide new opportunities for farmers, but it requires the development of new varieties that combine heat tolerance with multiple rust resistance genes.""Green beans are typically grown at altitudes higher than about 5,000 feet, which can have a temperate climate despite their proximity to the equator, but competition and land prices at these higher altitudes has increased," said Phillip Griffiths, vegetable breeder and associate professor of horticulture.

Because these two traits are also important for U.S. growers, Griffiths and his colleagues Tim Porch, Ph.D. '01, and Talo Pastor-Corrales of the USDA Agricultural Research Service, already had sources for both in hand, ready for breeding into the specific types of slender green beans needed for eastern Africa.

The funding for the breeding came from several sources, including the Alliance for a Green Revolution in Africa, the Toward Sustainability Foundation, Cornell's Mario Einaudi Center for International Studies and the Cornell Assistantship for Horticulture in Africa (CAHA), a recently established doctoral scholarship established by an anonymous donor.

Kenyan Charles Wasonga, Ph.D. '10, the first recipient of the CAHA fellowship, took the field trials of the new green beans through two years at six sites, including partner institutes in Kenya and Tanzania. He identified promising types with comparable yields at lower altitudes (about 3,600 feet) and a combination of rust resistance genes that protected against all known rust strains in the region.

Breeding and evaluating beans for Africa from upstate New York turned out to be an effective approach.

"For these particular traits, the performance of the plants in high-temperature greenhouses in New York and selection for rust resistance in the USDA's Maryland greenhouses correlated very well with field performance in Puerto Rico, Kenya and Tanzania," said Griffiths.

There may be a second opportunity to leverage the research and resources at Cornell for the benefit of sub-Saharan Africa.

Sukuma wiki is the most important leafy green vegetable in the Lake Victoria region. It is a dietary staple that is produced for local consumption rather than for export. It also happens to be a variant of cabbage with some of the same production challenges facing growers in New York, including black rot. An endemic disease in eastern Africa, black rot typically renders 50 percent to 80 percent of the leaves unmarketable.

"By moving resistance from Cornell's cabbage breeding program into sukuma wiki, marketable yields could be significantly increased," said Griffiths. "It is a project requiring a sponsor focused on people, not profits."