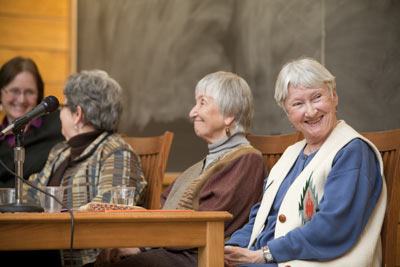 As the first and only woman in the University of Chicago's graduate school of business in the 1960s, former Cornell faculty member Judy Long, professor emerita of Syracuse University, said that she "developed certain survival techniques, including what we called one-liners." After delivering one of her first published papers on marriage happiness literature, she said, an audience member asked, "'Are you married?' I paused for quite awhile, and then I said: 'I don't remember.'"

From its inception, "interdisciplinarity was a hallmark of the program," said Sally McConnell-Ginet, director of women's studies from 1992 to 1996 and professor emerita of linguistics. "You can't begin to think about these topics unless you bring a variety of perspectives," she noted, adding that "everybody was so generous intellectually."

Joan Jacobs Brumberg, director of women's studies from 1985 to 1988 and professor emerita of history, of human development and of gender studies, exemplifies the program's interdisciplinary nature. "I made my home beginning in 1979 as half women's studies" and the other half "in the College of Human Ecology," she said.

All of Brumberg's courses at Cornell were cross-listed, and she was able to invent them herself. "It was women's studies and the social sciences," she observed, that "brought me to a new place intellectually" and "had a profound effect on my work. ... That niche that women's studies allowed me at Cornell, at that university where you can study anything, also allows you to teach anything, and it's been a very positive experience for me."

Despite the specific training required for different disciplines, "the friction and the sparks that are created" within and across disciplinary boundaries "are what generate ideas in feminism," said Shirley Samuels, director of women's studies from 1996 to 2000, professor of English and chair of the Department of History of Art. The new challenge, she added, is "formulating a position with which to face the future as well as the past. ... How do we find a home in the future?" she asked.

In 2002, a debate took place over whether to rename the program -- then called Women's Studies -- either Feminist Studies or Gender and Sexuality Studies. McConnell-Ginet suggested that both be used. Its current name reflects the program's focus, which "keeps shifting a bit," she acknowledged.

According to Shelley Feldman, director of FGSS and professor of development sociology, the program serves as "an institutional space that provides another arena to formulate and engage and argue and debate." Despite the recent name change signaling "a whole host of other changes," she added, "the program has always raised cutting-edge themes and notwithstanding its long career, continues to do so."

Walter Cohen, senior associate dean of the College of Arts and Sciences, praised FGSS for its "informal, nonmeasurable but nonetheless deeply important resonance" in Cornell's intellectual life. Beyond the classroom, said Rebecca John '14, FGSS offers a way to "interact with the people around you, and be much more respectful and responsible in the activities you engage in."