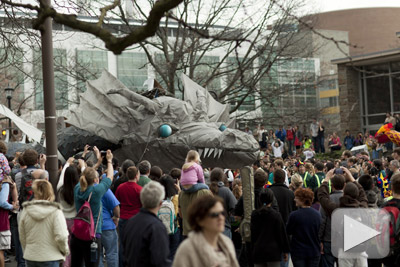 Robert Barker/University Photography
The 100-foot-long dragon makes its way to the Arts Quad.

A 100-foot-long, undulating dragon will make its way across campus March 16 in celebration of Dragon Day, Cornell's annual rite of spring and rite of passage for first-year architecture students.

The theme for this year's creation was easy -- the ritual coincides with the Year of the Black Water Dragon on the Chinese calendar, said Cameron Neuhoff, B.Arch. '16, Dragon Day team co-design chief with Peter Feng, B.Arch. '16.

"It's a marriage between a Western dragon and a Chinese dragon, with the long, serpentine aspect for most of it and the frontward bulkiness of the Western dragon," Neuhoff said in between welding parts of the dragon's frame behind Rand Hall this week. 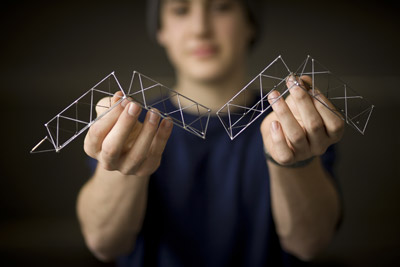 The class of 58 students works into the night all week to prepare the dragon for the celebration.

"They don't have to participate, but by tradition, it's a rite of passage," said Brian Beeners, Dragon Day adviser.

Class members learned shop skills in the process, from welding to running a drill press and other equipment in the Rand Hall shop. They also scrounged some materials, including "Dumpster-diving and collecting cardboard for scales," Beeners said.

Students in other departments in the College of Architecture, Art and Planning and those at other Cornell colleges also join in, with the engineering students' phoenix the most established tradition. 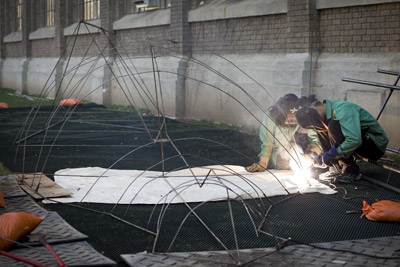 The group effort is supported by sales of T-shirts, which also reflect a 2012 theme -- an Aztec-inspired dragon motif to reflect the end of the world according to the Mayan calendar. The Dragon Day celebration is preceded by a marketing push on campus each year, and this year the class sold more than 200 of the $10 shirts during last weekend's Milstein Hall celebration alone.

The annual parade begins March 16 at 1 p.m., starting from Rand Hall. The dragon and its student handlers will travel east on University Avenue, south on East Avenue, west on Campus Road, and turn north onto campus at the end of College Avenue to proceed to Ho Plaza and the Arts Quad, for a ceremony near Sibley Hall. 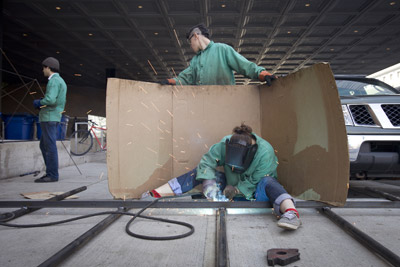 From 12:30 to 1 p.m., vehicle access to East Avenue from University Avenue will be limited to bus traffic only; once the parade begins, vehicle access along the dragon route will be restricted, and bus routes may be delayed or rerouted.

Cornell Police and Environmental Health and Safety ask the community to enjoy the festivities in a safe fashion.

"I want students to be safe, with no damage to property and no one being hurt in any way," Beeners said.