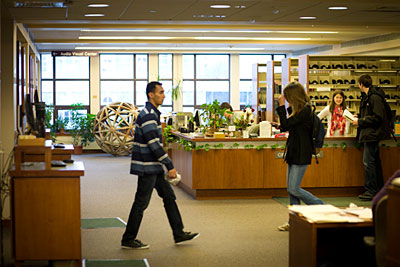 With a collection of 170,000 books, scores and serials; 87,000 sound recordings; 2,800 video recordings; and 8,900 microforms, the Sidney Cox Library of Music and Dance gives faculty and students plenty of music to study.

Located in Lincoln Hall, the Cox Library was established in 1929 as a small, departmental collection, said Bonna Boettcher, director of music and fine arts libraries and adjunct professor of music.

The music department itself was founded in 1903. "There has been music at Cornell practically since its founding," said Boettcher. "There are references in old department literature of the music library being … in a closet under the stairs in a Wait Avenue building."

In 1957, the university hired its first music librarian. "Harold Samuel was really instrumental in establishing the music collection as a research collection." 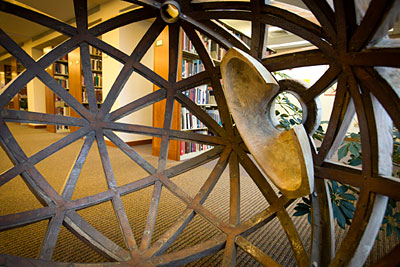 However, "there was certainly interest before then -- Otto Kinkeldey was the first chair of musicology in the United States [in 1930 at Cornell] and is considered by many to be the first U.S.-trained musicologist. The plaque at the entrance to the library highlights some of Kinkeldey's achievements."

In 1961, Samuel oversaw the music library's move to its current location in Lincoln Hall. Prior to the Lincoln renovation in 1999-2000, the building's construction was not sufficient to house library materials. "The library was in various areas around the building, and the sound recordings were on the lowest level due to load-bearing capacities.

"When the renovated and expanded library opened, it was what people knew had been needed for many years," said Boettcher. The renovation increased library space by 70 percent and provided open stacks that allowed for easy browsing.

"In addition, there has been interest in and faculty who focus on music outside the western tradition. Our strengths include Indonesian music, African field recordings, Brazilian popular and folk music and Middle Eastern music. American and European popular music has also been part of the curriculum for a number of years so there is a great depth in materials, both recorded and print." The library also houses Cox's collection of first and early editions of Verdi operas that are now part of the special collections area.

And the collection continues to grow. "There is a wide range of sound recordings available on site, some 78 RPM, a good collection of LPs and an ongoing collection of CDs," said Boettcher. "We also provide a number of streaming audio and video databases along with electronic resources that support music and dance research. The collection reflects the research and performance interests of the music and dance department faculty and students."