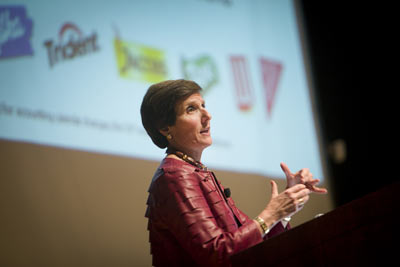 When Irene Rosenfeld took charge of Kraft Foods in 2006 as CEO, its chips were down, its cookies crumbling. Today, the second-largest food company in the world is on the menu of billions of people, exceeding even Rosenfeld's expectations following a thorough retooling and adjustment to the new realities of growing a far-flung international business.

Rosenfeld earnestly told the story of how she has led Kraft's resurgence as the 30th Hatfield lecturer March 7 in an address titled "Against the Wind: Growing in Turbulent Times."

From Kraft's hostile takeover of the British confectioner Cadbury -- when Rosenfeld found herself stalked by the notoriously aggressive London tabloids -- to decentralizing control by Kraft's Chicago-area headquarters over its 127,000 employees in 170 countries and empowering local managers -- Rosenfeld recounted her adventurous journey in her trademark high-energy style.

Rosenfeld's 2006 return to Kraft, where she has spent most of her career -- she was named chairman a year later -- followed a two-year stint as chairman and CEO of Frito-Lay. "I understood at that time that it was going to be the big cheese of turnarounds, and it hasn't disappointed me at all," she said.

Rosenfeld took her listeners on a PowerPoint-illustrated trip around the world. Taking the top spot at Kraft, she put new executives in place and positioned the company to adjust to political and social upheaval, natural disasters, economic strife, climate change -- all of which have an impact on Kraft.

"I'm afraid that this is the new normal, and so our challenge is to figure out what we want to do differently in the face of this kind of turmoil and volatility to be successful," she said. Kraft also had internal challenges: a stock stagnant for five years, slow growth, a nearly dry innovation pipeline. Today Kraft is delivering results that exceed its own projections, Rosenfeld said.

"Four years ago, less than half of our products were preferred to competition," she said. Reinvesting in product quality and marketing its "power brands" rejuvenated them. Rosenfeld showed hipper TV commercials for Miracle Whip; a father and son bonding over Oreos; and Dentyne chewing gum analogized to "protection" essential when dating. "That's not your mother's Kraft," Rosenfeld said. Kraft has also introduced a number of new foods, such as Cadbury Dairy Milk Bubbly chocolate bars and Velveeta Cheesy Skillets. "The combination of increased marketing support and stronger innovation together had a profound impact on our results," Rosenfeld said.

Earlier in the day, Rosenfeld said she was delighted to meet with women student leaders "who made it clear to me that I could not get into Cornell today. They are so impressive."

The Financial Times and Fortune ranked Rosenfeld No. 1 on their "Top 50 Women in Global Business" and "50 Most Powerful Women in Business" lists. Rosenfeld holds Cornell degrees in psychology (B.S. 1975), business administration (M.S. 1977) and marketing and statistics (Ph.D., 1980) and has served as a Cornell trustee since 1999.