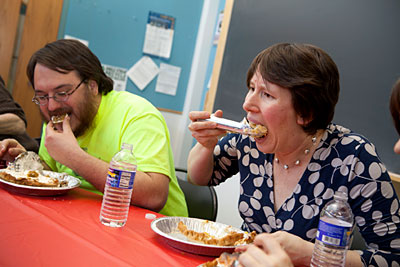 Lindsay France/University Photography
Participants use their hands and nontraditional utensils to wolf down pie during the Pi Day celebration at Cornell March 14 in Malott Hall. At left is Lucien Clavier, a mathematics graduate student; Tara Holm, associate professor of mathematics, is on the right and placed second in the contest.

Pie eating competition contestants aren't usually asked to contemplate the beauty of a pie's circumference divided by its diameter while devouring as much of it as they can.

But on Pi Day, (March 14 -- 3.14, get it?), the universal mathematical constant π was celebrated simultaneously by the consumption of its baked edible homonym.

Cornell's first celebration of the mathematical holiday saw 11 competitors (including math faculty, graduate students and one undergraduate) try to devour one pie each as quickly as possible. The pies -- sweet potato, apple and lemon meringue, to name a few -- were baked by math graduate students.

"Eating pie is traditionally part of Pi Day," said Kathryn Lindsey, a Ph.D. student in the field of mathematics, president of the event's sponsor, the Association for Women in Mathematics' Cornell student chapter. "Pi shows up in mathematics formulas describing everything from gravity to electricity to complex physical processes. It is pervasive in mathematics, and yet it's still a somewhat mysterious and beautiful number." 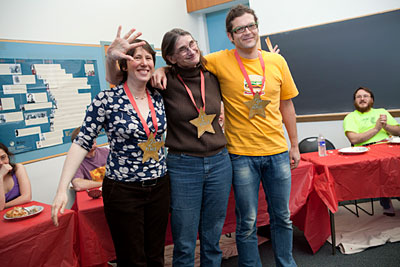 The contest began when graduate student Kristine Jones, vice president of the student chapter, rang the Pi Bell (an actual bell in the Malott Hall fifth-floor lounge with a "Pi" symbol on it, provenance unknown) at precisely 1:59 p.m. Honoring Pi with the 3.14 date and 1:59 time marks Pi's leading digit and first five decimal places, 3.14159.

Contestants used a nontraditional utensil of their choice (wooden forks, spaghetti servers, ricers, whisks). A large crowd cheered them on, laughed and captured the event on smartphones.

The goal of the celebration was to build community spirit, Lindsey said, while also showing that mathematicians can be a really fun group.

Following the contest, additional pies were available for by-the-slice snacking at a screening of "The Great Pi vs. E Debate."