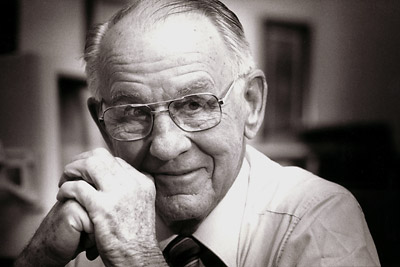 Dale Raymond Corson, Cornell University's eighth president, a physicist and an engineer, died March 31 of congestive heart failure at his home at Kendal at Ithaca. He was 97.

A professor of physics emeritus at Cornell, Corson was a polymath whose achievements in physics and engineering date to 1940, when he discovered astatine, element 85 in the periodic table of the elements. During World War II he helped introduce the use of radar into military operations.

But his finest moments came as Cornell's president from 1969 to 1977. Modest and mild-mannered, he led Cornell through the era of student protest against the Vietnam War and for civil rights and restored the university to stability. 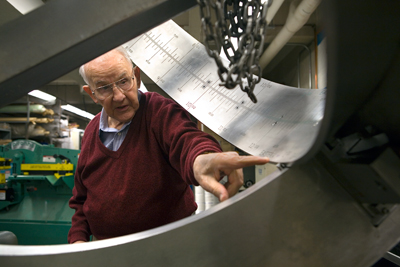 Jason Koski/University Photography
In this 2006 file photo, President Emeritus Dale Corson explains calibration markings on the Pew Sundial, which he co-designed and built in 1980.

"Dale Corson guided Cornell through one of its most difficult periods with extraordinary wisdom and grace," said Cornell President David J. Skorton. "His love for this university was exemplary, and I feel privileged to have had him as a mentor and friend."

After the peak of campus student activism and a wave of faculty resignations, Corson calmly and resolutely poised the university for a new period of growth, then guided it through the economic recession of the 1970s.

"What Dale did here from 1969 to 1977 was to rebuild the university from the inside, with the indispensable help of many alumni," said Walter LaFeber, a Tisch Distinguished University Professor and former chair of the history department. "There probably was not a worse job in higher education in the United States in the spring of 1969 than the presidency of Cornell, and it could have gotten a lot worse. But people pulled together, and that was because of Dale."

A celebration of Dale Corson's life

A celebration of the life of Dale Corson will be held Saturday, Sept. 8, at 10:30 a.m. in Sage Chapel. A reception will follow in Sage Hall Atrium.

Professor Emeritus J. Robert Cooke, former dean of the university faculty, recalled Corson's "wise and unpretentious" leadership, and his "integrity and competence" that inspired abiding respect from many.

"Dale is one of the truly great persons of Cornell's history, as evidenced by his humanity, his respect for the opinions of others, his scientific achievements, his wisdom in guiding the university through its most difficult period, and for the great breadth and wisdom of his leadership in so many diverse realms of his life," Cooke said.

Corson was born in Pittsburg, Kan., April 5, 1914. He earned an A.B. at the College of Emporia (1934) and an M.A. at the University of Kansas (1935). His Ph.D. in physics was awarded by the University of California-Berkeley in 1938, when nuclear physics was in its golden age. As a postdoctoral fellow working under physicist Ernest Lawrence, Corson discovered astatine, and with two associates worked out its physical and chemical properties.

He was a staff member at the Massachusetts Institute of Technology Radiation Laboratory from 1941 to 1943. He lived in London during part of the Blitz while helping adapt his work on radar for the British Royal Air Force. At MIT, he played a key role on the Anglo-American research team that perfected the use of airborne radar. Corson later served as a technical adviser at U.S. Army Air Corps headquarters in Washington, D.C., where he consulted on radar deployment in Europe and the Pacific.

At the end of the war he worked at Los Alamos Scientific Laboratory, directing the establishment of the Sandia National Laboratory. For this and other wartime service, Corson received a Presidential Certificate of Merit in 1948.

After Corson's service as chancellor, the Cornell Board of Trustees passed a resolution stating, in part: "[Corson's] fundamental human kindness, combined with foresight, steadfastness and quiet humor has set an example of unpretentious effectiveness that has captured the meaning of Cornell for us all."

Corson helped design Cornell's first high-energy electron synchrotron facility, and he played a leadership role in establishing the university's eminence in materials science, computer graphics and multidisciplinary research. In recent years he designed and guided the construction of an elegant and accurate sundial on Cornell's engineering quad.

He was instrumental in the formation of Cornell's Center for Radiophysics and Space Research, and he helped create the Science, Technology and Society Program. He also promoted the Division of Biological Sciences (one of its buildings is Corson Hall). He and his administration developed or revitalized new approaches to teaching and research in geology, history, Africana studies, medieval studies, water resources and women's studies at Cornell.

A quiet man who was much admired for his personal integrity, serious scholarship and accomplishments in his many areas of interest, Corson spent two decades after stepping down from the Cornell presidency chairing major national study groups on such subjects as U.S.-Japanese scientific relations, the introduction of modern science and technology into China, and the balance between national security and open inquiry in academic research. At the National Academy of Sciences, he founded the Government-University-Industry Research Roundtable to promote exchange among leaders.

Corson devoted much time to thinking about and lecturing about the future of the research university. He helped found the life care retirement community Kendal at Ithaca by serving as chair of the committee that developed it. In this role he worked with community leaders and legislators to change state laws that impeded the creation of such communities. He was also an enthusiastic and skilled photographer.

Corson was devoted to and beloved by his family. He is survived by his wife of 73 years, the former Nellie E. Griswold, and their four children: David (Carolyn Corson) of Ithaca; Bruce (Mary Wyman) of Sebastopol, Calif.; Richard (Shirl Dorfman) of Phoenix, Ariz.; and Janet (Jon Corson-Rikert) of Ithaca. He also leaves six grandchildren and six great-grandchildren.

A celebration of Corson's life is being planned, and details will be announced at a later date.

Memorial contributions can be made to the Dale R. Corson Memorial Fund to support student health and well-being at Cornell University, P.O. Box 223623, Pittsburgh, PA 15251-2623; or to a charity of your choice.