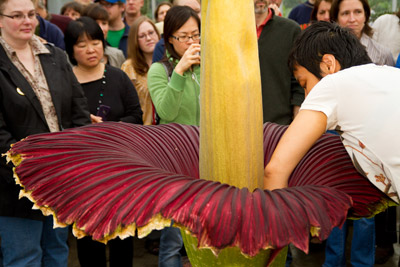 Chris Kitchen Photography
Gwynne Lim, Ph.D. candidate in the field of plant biology, brushes pollen on the stigmas of the female flowers of Cornell's titan arum, also known as the "corpse plant," which bloomed March 18.

When a rare corpse plant showed signs of imminent blooming on Cornell's campus March 14, the university opened its greenhouse doors to the public and live-streamed the event through two separate feeds.

The plant, dubbed "Wee Stinky" by way of a public vote, went into full bloom on the afternoon of Sunday, March 18, revealing its characteristic rotting flesh odor. But instead of drawing carrion flies, as it would in its native Sumatran rainforests, it drew thousands of people.

Between March 14 and the night of March 19 when the bloom wilted away, the plant -- also known as titan arum (Amorphophallus titanum) -- attracted about 10,000 visitors, including more than 3,500 on March 19 alone. 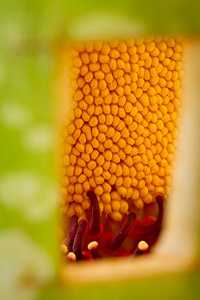 Chris Kitchen Photography
Corpse plant pollen seen through portholes cut in the side of the plant.

"On Sunday night [March 18], the line was over an hour long," said Ellen Leventry, a communications specialist with the College of Agriculture and Life Sciences. The doors stayed open until close to midnight.

"So many people thanked us for opening it up the public and providing them with an incredible opportunity," Leventry said. "But this is part of our land-grant mission; we are here to share really exciting research and discovery with our community."

And, as "land-grant university to the world," Cornell shared the bloom, which on record has only been observed some 140 times in history, globally via two live streams, one low-resolution stream and another high-resolution stream set up by Cornell Information Technologies (CIT). The low-resolution feed, which went up March 13 and is still live, received more than 55,819 views between March 13 and March 20. Meanwhile, CIT's high-resolution feed, which was made public March 17-20, received 378,000 views.

Among many correspondents, a teacher in Georgia sent a photo of her class watching the Cornell live stream and a woman in Scotland wrote in with questions. The streams were promoted through department websites, news stories, a blog, Twitter and Facebook.

Some 53 percent of 2,000 online and paper-ballot voters dubbed the plant "Wee Stinky," with the name "Uncle Ezra" coming in second with 33 percent of the votes, and "Big Red" third with 14 percent of votes.