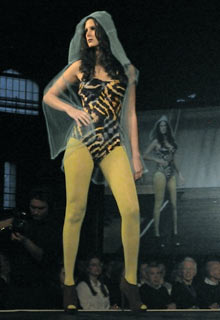 Two Cornellians from Africa have created a hooded bodysuit embedded at the molecular level with insecticides to ward off mosquitoes infected with malaria, a disease that kills some 655,000 people annually on the continent.

Though insecticide-treated nets are common in African homes, the Cornell prototype garment can be worn during the day to provide extra protection and does not dissipate easily like skin-based repellants. What's more, by binding repellant and fabric at the nanolevel using metal organic framework molecules (MOFs), which are clustered crystalline compounds, the mesh fabric can be loaded with up to three times more insecticide than normal fibrous nets, which usually wear off after about six months.

"The bond on our fabric is very difficult to break," said Frederick Ochanda, postdoctoral associate in fiber science and apparel design (FSAD) in the College of Human Ecology and a native of Kenya. "The nets in use now are dipped in a solution and not bonded in this way, so their effectiveness doesn't last very long."

The colorful garment, fashioned by Matilda Ceesay '13, an FSAD apparel design major from Gambia, debuted at the Cornell Fashion Collective spring fashion show April 28 on campus. It consists of an underlying one-piece bodysuit, hand-dyed in purple, gold and blue, and a mesh hood and cape containing the repellant. The outfit is one of six in Ceesay's collection, which she said "explores and modernizes traditional African silhouettes and textiles by embracing the strength and sexuality of the modern woman."

Ceesay and Ochanda, who works with FSAD Associate Professor Juan Hinestroza, partnered with Laurie Lange, graduate student in Professor Kay Obendorf's lab, to refine the process for capturing insecticides on the MOF-coated cloth. Hinestroza called the resulting garment "fashionable and functional, with the potential to create a new generation of durable and effective insecticide mosquito protection nets." 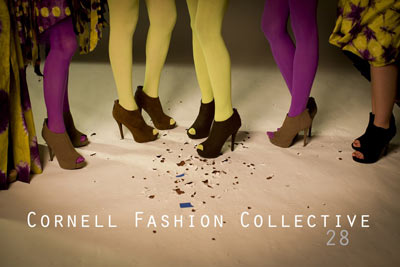 Although malaria is preventable and curable, it remains one of the leading causes of death in Africa, according to the World Health Organization. The WHO estimates a child dies every minute from the disease, which is spread by parasites passed to humans by bites from infected mosquitoes.

Ochanda and Ceesay, from opposite sides of the continent, both have seen family members suffer from the disease. Its prevalence in Africa -- the source of 90 percent of the world's malaria infections annually -- can also lead to harmful misdiagnoses. Ceesay recalls a family member who died after doctors treated her for malaria when she had a different sickness. "It's so common back home; you can't escape it," Ceesay said.

"Seeing malaria's effect on people in Kenya, it's very important for me to apply fiber science to help this problem," Ochanda added. "A long-term goal of science is to be able to come up with solutions to help protect human health and life, so this project is very fulfilling for me."

Ultimately, Ceesay and Ochanda hope the outfit they developed will serve as a prototype to drive new technologies for fighting the spread of malaria. On the horizon, Ochanda said, is an MOF fabric that releases repellant in response to changes in temperature or light -- offering wearers more protection at night when mosquitoes are on the hunt. At minimum, they hope the technology can be applied to create longer lasting insecticide-laden bed nets.

Despite the use of mosquito nets, "people are still getting sick and dying," Ceesay said. "We can't get complacent. I hope my design can show what is possible when you bring together fashion and science and will inspire others to keep improving the technology. If a student at Cornell can do this, imagine how far it could go."