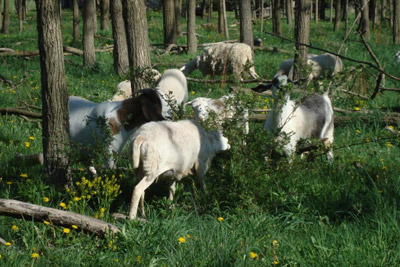 Provided
Goats graze in a forest.

Putting cows, sheep and other livestock into forests to graze could prove to be a valuable tool for New York woodland management, say Cornell Cooperative Extension (CCE) agriculture educators and colleagues in the Cornell Forestry Program.

They are advocating for the return of silvopasturing -- managed grazing in woodlands.

With pastureland at a premium, they hope that the practice will appeal to farmers, who could benefit from the increased feed options and better shade protection for their animals.

The ability to use a part of their land long off limits to their animals may also mean a new way for farmers to pay the land's taxes. To give farmers a greater incentive to convert forested acreage into silvopasture, the New York State Senate recently voted to amend the state's agricultural assessment program to include silvopasturing.

"We're being forced into a situation where we have to look at how we utilize our limited agricultural land area," he said. "Silvopasturing fits our landscape in the Northeast, where most pastureland is juxtaposed with forest. In the past we did a good job of telling people to keep animals out of the woods, but rules change."

Ithaca area farmer Steve Gabriel of Work With Nature Design, who is an extension aide in Cornell's Department of Horticulture, is experimenting with the practice in a novel way. With a grant from the Northeast Sustainable Agriculture Research and Education program, he is pasturing ducks in a mature sugar maple woodlot, which has the added benefit of providing pest control for another of his agroforestry projects, a shiitake mushroom farm.

"Ducks are currently undervalued as a wonderful animal that has potential to both control pests and provide marketable eggs and meat," Gabriel said. "Integrating them into agroforestry practices would likely get more farmers interested in considering producing niche crops like mushrooms."

Trees and livestock must be managed properly so both stay healthy, Chedzoy said. Livestock should be rotated often to avoid damage to trees, for example, and the forest canopy must be kept thinned to allow sunlight to penetrate to allow the growth of grasses.

His team has compiled a silvopasturing guide and website with online forums, led more than two dozen talks across the Northeast, and held a regional conference in Watkins Glen.

"We're trying to teach people that it's okay to use intensive livestock grazing to productively use woodland areas. It's a restoration tool to restore healthy successional dynamics to an ecosystem," Chedzoy said. "Most farmers don't see their woods as an integral part of the farm operation, but it's very popular in other regions."

Legislative outreach has also become a big part of the team's activities.

Julie Suarez of the New York Farm Bureau says she's hopeful the Senate silvopasturing amendment will also pass in the Assembly later this year, due in no small part to efforts from extension educators.

Aaron Munzer is a freelance writer.