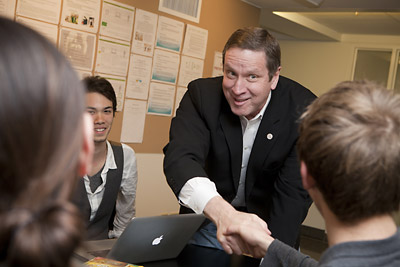 The latest green revolution is not only about safeguarding the environment, but also about smarter business and upholding human dignity, said Rick Fedrizzi, president, CEO and founding chair of the U.S. Green Building Council (USGBC).

In his April 5 talk on campus, "People, Planet and Performance," Fedrizzi stressed: "We need to rethink buildings. Do they treat us with dignity as human beings or not?

"Any building that enhances us as humans, we do better in," said Fedrizzi, who is also founder and chair of the World Green Building Council. Greener buildings mean better schools and better hospitals, as well as better workplaces, he noted.

However, a "retrofit revolution" of existing buildings is where the greatest gains can be made, he stressed.

Since the USGBC was established in 1993, its goal has been "to shift the [real estate] market to sustainability," he said. It did this by developing the Leadership in Energy and Environmental Design (LEED) green building rating system.

With the system gaining ever more widespread use in the industry, we are seeing a marketwide change, he said. Companies are realizing that they can save money by reducing buildings' energy inefficiencies, and that employees perform better by enjoying cleaner air and sunlight.

Until LEED, he said, we never had the ability to understand anything about buildings' "environmental value," including air quality, incoming sunlight, energy consumption and costs.

Instead of focusing on renewable energy or developing ultra-efficient green buildings (though both are good initiatives, he said), retrofitting America's countless existing buildings to make them more environmentally friendly could reduce U.S. energy consumption by 56 percent by 2050, according to one estimate. Such retrofits would also help create jobs and boost economic development, Fedrizzi added. "Everything the left and the right fight about every Monday morning can be impacted by these reductions," he said.

His talk was the inaugural Glenn H. Beyer Memorial Lecture, organized by the Department of Design and Environmental Analysis in the College of Human Ecology.

During his visit, Fedrizzi also met with student leaders from Cornell University Sustainable Design, toured the new Human Ecology Building (which is on target to receive a LEED Gold rating or perhaps even a Platinum rating, LEED's highest rating) and visited an undergraduate design class.

Paul Bennetch '12 is a writer intern for the Cornell Chronicle.