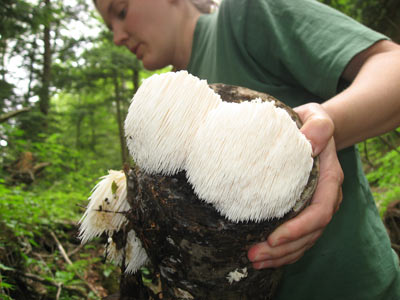 With its large clumps of cascading white tendrils, the Hericium erinaceus looks less like a mushroom and more like a lion's mane (its nickname).

Cornell agroforestry experts are hoping the exotic fungus -- cultivated by the Chinese for its medicinal benefits -- will follow the lead of shiitake mushrooms and become a hit with New York farmers and foodies.

Their experiments have shown that lion's mane would be well-suited as a crop for Northeast forests, providing a new opportunity for farmers, woodlot owners and even backyard mushroom enthusiasts.

Its seafood-like texture and flavor-absorbing properties would also make it a treat for chefs in search of new culinary inspiration, said Ken Mudge, associate professor of horticulture.

He will introduce farmers to the cultivation of shiitake and lion's mane mushrooms at Camp Mushroom, a two-day workshop at the Arnot Teaching and Research Forest, April 13-14.

Mudge has been leading experiments for several years into the ideal conditions for mushroom cultivation in New York forests. Shiitakes have garnered the most attention, but other varieties have been also been tested, and lion's mane shows particular promise.

Using a "totem" system in which 1-foot-long logs are stacked on top of each other, Mudge achieved "impressive production" of around two pounds of lion's mane mushrooms per log.

Similar to shiitake mushrooms, logs are drilled with holes and inoculated with sawdust colonized with mushroom mycelium. The holes are sealed with wax, and the logs are stacked in the shade and left for a year.

While shiitake logs are "flushed," put in a stream or tank of cold water overnight, to shock the fungi into production, lion's mane totems fruit on their own schedule, often more than once a year for three to five years.

With shiitake mushrooms selling for $12-16 per pound, a relatively small investment of work can yield a tidy supplemental income. With 100 inoculated logs per year, and each log producing for three years, an annual gross income after four years would be around $6,000, Mudge said. 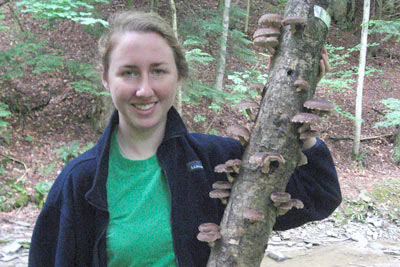 Currently, lion's mane is only grown commercially indoors, in sawdust. Shiitake can also be grown that way, but most consumers prefer the flavor of those grown outdoors, Mudge said.

"There have been very few attempts to grow lion's mane as a forest farming crop, and we think it has a lot of potential. It's considered a real gourmet item," he added. "We see it as a great way that a mushroom farmer can diversify."

The biggest challenge will be marketing; in a survey of chefs from New York restaurants, very few had heard of lion's mane, Mudge said. But he is hopeful that mushroom growers who sell shiitakes will help introduce people to the new variety.

And interest in gourmet fungi has been mushrooming, Mudge said.

"Every year, it seems that more and more people want to attend our workshops," he said.

He's now in the midst of a three-year project working with growers to establish commercial shiitake enterprises. More than 150 people attended two introductory workshops, and 23 were selected from seven states across the Northeast. Last summer they inoculated 100 logs each. They are now tracking their labor, expenses, mushroom harvest and sales to determine best management practices.

Mushroom grower Steve Sierigk says there's a big local demand for shiitake mushrooms -- more than he can supply with the 800 logs inoculated on his Hector, N.Y., property.

"I feel like we are on the crest of a wave," Sierigk said.