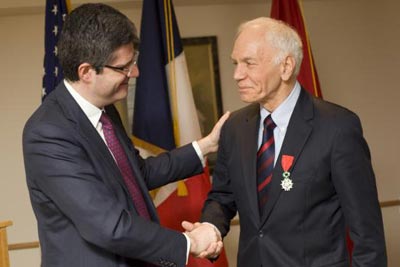 "It came as a complete surprise, a bolt out of the blue, and I'm still feeling flabbergasted," said Barceló, who received the news in a letter from Sarkozy in early January. "I'm deeply honored by it, and when I first learned of the award, it reminded me of all the thinking that had gone into our initial choice of Paris, making it the focus of our activity abroad. Objectively, there were many reasons to choose France, whose legal system has been a central force in developments throughout the world, particularly in relation to civil law. But the decision also had a subjective, personal element to it."

"Professor Barceló has been at the center of the Law School's growth in international and comparative law," said Stewart J. Schwab, the Allan R. Tessler Dean and professor of law. "He is a great colleague, teacher and mentor. He has been intimately connected with the French legal system and Cornell Law's many programs with French law schools, including overseeing our longstanding Paris Summer Institute, a five-week academic program in international and comparative law at the Université Paris 1 Panthéon-Sorbonne. Jack Barceló is richly deserving of this honor."

Born and raised in New Orleans, where he earned a J.D. from Tulane University in 1966, Barceló likes to say he "studied French law before most of the lawyers in France. Not only am I older than most lawyers in France, but from the time I started studying Louisiana law, which is based on the Napoleonic Code, I was very conscious of the importance of the French civil law legal tradition. This helps to explain the role comparative law has played throughout my career."

François Delattre, French ambassador to the United States, presented the medal to Barceló in a private ceremony in Ithaca April 2. Delattre noted that the dual degree program Barceló was instrumental in creating is one of only two established between an American law school and a French law school.

After the ceremony Delattre gave a public lecture on "New Opportunities in the Franco-American and the Transatlantic Partnership," in which he addressed economic, diplomatic and military cooperation between France and the United States.

Joining Delattre and Barceló at the induction ceremony were Schwab; Richard Ortoli, J.D. '80, who nominated Barceló for the award and serves as the elected representative of French citizens living in the eastern United States; Hélène Ruiz Fabri, dean of the Sorbonne Law School; Cornell Law professors Valerie Hans and Mitchel Lasser; and Claire M. Germain, the Edward Cornell Law Librarian and emerita professor of law. Barceló was also joined by his wife, Lucy, and his children, Amy ('00, J.D. '04) and Steven ('03, M.Eng. '04).

Three years ago Ortoli and Germain proposed nominating Barceló for the Legion of Honor. Surprised to learn Barceló's contributions had yet to be recognized by France, Ortoli helped advance Barceló's candidacy through the French Consulate General in New York, the French Embassy in Washington, D.C., the Grande Chancellerie of the Legion d'Honneur, and to Sarkozy, who signed the decree in December 2011.