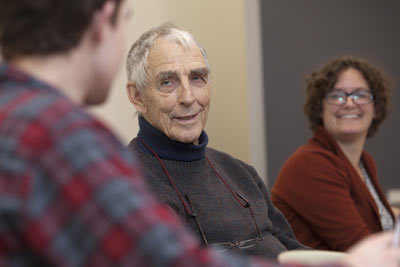 Along the Alaskan coast, the ice is melting from global climate change. According to author and conservationist Peter Matthiessen, "the coastal villages one by one are being flooded out." Noting that "the bonus of a big oil executive" could finance the relocation of an entire village, he asked: "What kind of justice is that?"

Matthiessen, a two-time National Book Award winner who has published more than 30 books over six decades, delivered the 2012 Jill and Ken Iscol Distinguished Environmental Lecture on "Big Oil and Our First Climate Change Refugees" before a packed Statler Auditorium April 23. In his fiction and nonfiction, including "The Snow Leopard," "Shadow Country" and "At Play in the Fields of the Lord," Matthiessen has focused on his personal travels, wildlife and the environment, and Native American issues and history.

Matthiessen said he has loved Arctic Alaska ever since his first trip there in 1957 to study extinct and vanishing wildlife. Lamenting the effects of global warming, he said that "the Arctic Ocean is virtually clear in the summertime now," while "even in my lifetime it was solidly iced over.

"I have a very bad feeling about big oil," said Matthiessen, who also met with several classes while on campus. "ExxonMobil, in my opinion, is the biggest corporate outlaw in history," he added, citing its carelessness in the 1989 Exxon Valdez oil spill off the coast of Alaska.

Although in 1980 the Alaska Lands Act doubled the territory of the Arctic National Wildlife Refuge in northeast Alaska, Matthiessen said, "big oil insisted on a clause that a certain region," known as the 1002, could be examined for petroleum. Every spring, caribou from the Porcupine River migrate there in what Matthiessen called "one of the largest land migrations." We may call it the 1002, he said, but the native peoples "call it the sacred place where life begins."

"Big oil owns Alaska," and "they have such a grasp on the economy and the market system" as well, Matthiessen said. He attacked oil executives for "awarding themselves million-dollar bonuses on top of their million-dollar salaries" while Americans suffer from a recession. "And on top of that, of course, there's the pollution, and they're not very careful about it -- they do as much as they can get away with," he said. "They don't like rules; they fight regulations."

Since there is much more oil offshore than on land, he continued, Shell Oil Co. has proposed offshore drilling even though the ice is only sufficiently melted for two months out of the year. If a spill were to happen outside of that time, nothing could be done about it until the next year. The oil companies "know nothing or next to nothing about the ecology of the Arctic Ocean," Matthiessen said. "To take that chance is insane."

In Alaska, "on average there's a spill every day," Matthiessen said. Oil companies "just have not been responsible or careful or considered other citizens," he said. "It's our refuge, owned by the United States of America, not by them."

As indigenous peoples are displaced by the flooding caused by global warming, "nobody is helping," Matthiessen said. "This is a noble culture; they're incredibly wise, and there aren't very many of them," he added.

He closed with a Native American saying about the eroding environment from an elder in an Arctic village: "God may forgive us, but our children won't."