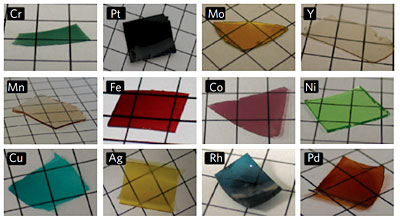 Wiesner Lab
Samples of self-assembled metal-containing films made by the new sol-gel process. The films are essentially glass in which metal atoms are suspended, which imparts the color., Grid lines are 5 mm apart.

For catalysts in fuel cells and electrodes in batteries, engineers would like to manufacture metal films that are porous, to make more surface area available for chemical reactions, and highly conductive, to carry off the electricity. The latter has been a frustrating challenge.

But Cornell chemists have now developed a way to make porous metal films with up to 1,000 times the electrical conductivity offered by previous methods. Their technique also opens the door to creating a wide variety of metal nanostructures for engineering and biomedical applications, the researchers said.

The results of several years of experimentation are described March 18 online edition of the journal Nature Materials.

"We have reached unprecedented levels of control on composition, nanostructure and functionality -- for example, conductivity -- of the resulting materials, all with a simple 'one-pot' mix-and-heat approach," said senior author Ulrich Wiesner, the Spencer T. Olin Professor of Engineering.

The new method builds on the "sol-gel process," already familiar to chemists. Certain compounds of silicon mixed with solvents will self-assemble into a structure of silicon dioxide (i.e., glass) honeycombed with nanometer-scaled pores. The challenge facing the researchers was to add metal to create a porous structure that conducts electricity.

About 10 years ago, Wiesner's research group, collaborating with the Cornell Fuel Cell Institute, tried using the sol-gel process with the catalysts that pull protons off of fuel molecules to generate electricity. They needed materials that would pass high current, but adding more than a small amount of metal disrupted the sol-gel process, explained Scott Warren, first author of the Nature Materials paper. 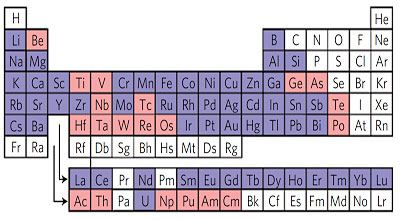 Wiesner Lab
Just about any metal in the entire periodic table (shown in red and blue) can be used in the new process. Those labeled in blue can be bought off the shelf from chemical supply houses in the appropriate form.

Warren, who was then a Ph.D. student in Wiesner's group and is now a researcher at Northwestern University, hit on the idea of using an amino acid to link metal atoms to silica molecules, because he had realized that one end of the amino acid molecule has an affinity for silica and the other end for metals.

"If there was a way to directly attach the metal to the silica sol-gel precursor then we would prevent this phase separation that was disrupting the self-assembly process," he explained.

The immediate result is a nanostructure of metal, silica and carbon, with much more metal than had been possible before, greatly increasing conductivity. The silica and carbon can be removed, leaving porous metal. But a silica-metal structure would hold its shape at the high temperatures found in some fuel cells, Warren noted, and removing just the silica to leave a carbon-metal complex offers other possibilities, including larger pores.

The researchers report a wide range of experiments showing that their process can be used to make "a library of materials with a high degree of control over composition and structure." They have built structures of almost every metal in the periodic table, and with additional chemistry can "tune" the dimensions of the pores in a range from 10 to 500 nanometers. They have also made metal-filled silica nanoparticles small enough to be ingested and secreted by humans, with possible biomedical applications. Wiesner's group is also known for creating "Cornell dots," which encapsulate dyes in silica nanoparticles, so a possible future application of the sol-gel process might be to build Graetzel solar cells, which contain light-sensitive dyes. Michael Graetzel of the École Polytechnique Fédérale de Lausanne and innovator of the Graetzel cell is a co-author of the new paper. The measurement of the record-setting electrical conductivity was performed in his laboratory.

The research has been supported by the Department of Energy and, through several channels, the National Science Foundation.