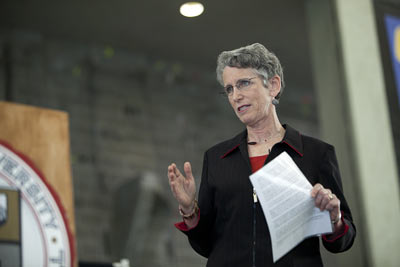 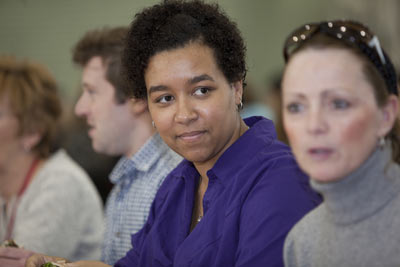 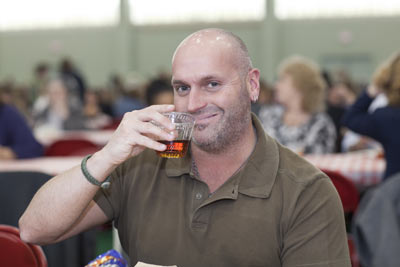 In the fast-paced, increasingly technological world of the office professional, the key is to selectively focus personal energy, said the two speakers at the 24th annual Jennie T. Farley Office Professionals Celebration, April 25 at Bartels Hall.

Mary Opperman, vice president for human resources and safety services, advised the audience of about 600 to do their most important work during the first hour at the office each day and to take a short break every 90 minutes to enhance their ability to concentrate. Guest speaker Barbara Lang, founder of the company The Etiquette Factor, noted that people will most remember the beginning and ending of an encounter or experience.

"It's in how you greet someone or say goodbye that you will be remembered," Lang said.

Both noted that office professionals are uniquely positioned to make positive differences in the lives of those around them on a daily basis.

"Just a friendly face can totally shift somebody's point of view," said Lang, who has held more than 40 jobs in the hospitality industry, including teaching and advising at Cornell's School of Hotel Administration.

"Offer unanticipated value," she advised, drawing from a time in her life when, after being diagnosed with late-stage colon cancer, she handed out bags of home-baked cookies to anyone who crossed her path at the hospital so that their first impression of her would be favorable and would stay with them later in her treatment.

Lang, whose personal anecdotes and humor often prompted laughter among the audience, also cited studies on happiness that have shown that people who do things for other people benefit the most, and that it is not "what" makes you happy, but "when" you are happy: It is the frequency of moments of happiness, not the "big-ticket items," that have the greatest effect on our sense of well-being, she said.

Opperman noted that the work of the office professional has changed dramatically since two ILR professors -- the late Alice Cook and Jennie Farley -- first organized the then-named Secretaries Day Symposium in 1988. "Your work has become more complicated, demanding and technical," she said. "Instant access, coupled with tough economic times, has greatly increased your workload."

But, she noted, because of this increased role, office professionals have greater impact on the life of the university, and she thanked them for all they do.

For Lang, office professionals are to be lauded for the small, genuine ways they interact with those who come to their desks. "It is that warm welcome," she said. "It is those 'cookies' you deliver to people. ... The legacy that you leave is that you can change someone's mindset for the day."

The speakers were preceded by lunch and followed by selections from Hearsay, a female student a cappella group at Cornell. More than 50 participants received plants or door prizes from Cornell departments and local businesses, ranging from massages to restaurant gift certificates to a two-night stay at the Cornell Club in New York City.

The event was sponsored by the ILR School, the Office of the President and the Division of Human Resources and Safety Services.