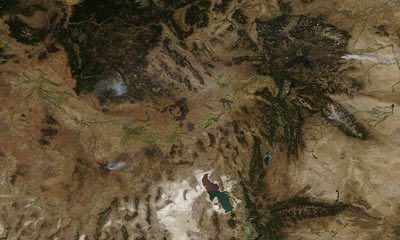 Two Cornell student teams are among 10 selected nationally for phase two of a government competition to spark interest in geothermal careers and education, and findings from the winners may be used by industry to develop new geothermal sites.

The National Geothermal Student Competition, sponsored by the U.S. Department of Energy and the National Renewable Energy Laboratory, requires student teams to develop professional-quality research reports that address the use of one or more exploration technologies -- from the fields of geophysics, geochemistry, remote sensing and geology -- to develop a geothermal system in Idaho's Snake River Plain.

Geothermal power draws underground heat to the surface for winter heating and summer cooling and to generate electricity.

Each of the 10 teams received a $10,000 research stipend to cover expenses as they complete phase two and submit their reports by Aug. 31. Authors of the top three reports will present their results at the Geothermal Research Council's annual meeting Sept. 30 to Oct. 3 in Reno, Nev.

An undergraduate team from Cornell University Sustainable Design (CUSD) will use remote sensing data to determine optimal geothermal energy sites, while a graduate team from the Cornell Energy Institute is gathering data and information to assess the Snake River Plain's potential for this form of sustainable energy.

The two teams are independent of each other, though both are mentored by geothermal energy expert Jeff Tester, the Croll Professor of Sustainable Energy Systems in the School of Chemical and Biomolecular Engineering.

The CUSD team will use remote sensing data with mapping and imaging software to locate the optimal placement for a geothermal system. Currently, companies must drill to determine the best locations. Remote sensing is cheaper, cleaner and easier than the conventional process of drilling to select workable sites, said Jesse McElwain '13, director of development and a CUSD founder.

"We are aiming to compile satellite images to make a multilevel map of the area, from the surface to deeper in the ground," said Katie Mayer '14, an ILR School student and CUSD geothermal-team leader.

Graduate students with the Cornell Energy Institute are developing a journal article that describes the Snake River Plain's features and determines its potential for geothermal energy. The project will include a comprehensive literature review. The group will use numerous sources to acquire data on geothermal gradients (temperature changes as one goes down), heat flow and thermal conductivity of the rock, energy consumption for the area, tectonic activity, human population densities and more.

The article will discuss the Snake River Plain's geothermal potential, provide a geothermal profile of the region, examine options for electricity and heating geothermal projects and offer an economic analysis of implementing a geothermal plant and the expected payback period, said Sean Hillson, Cornell Energy Institute team leader and a graduate student in the field of chemical engineering.

Other team members include graduate students Koenraad Beckers, in the field of chemical engineering, and Holly Taylor and John Mason, both in the field of earth and atmospheric sciences.