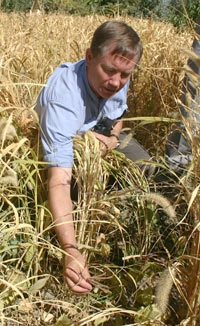 The solution to climate change mitigation and global food security could lie in the soil beneath our feet, said Peter Hobbs, Ph.D '72, adjunct professor of crop and soil sciences.

He invites fellow Cornell researchers to join him in fostering a "brown revolution" that promotes conservation agriculture, which involves minimal soil disturbance and the use of cover crops and crop rotations to naturally control weeds, pests and diseases. And he hopes many will become part of multidisciplinary collaborations as part of a new Sustainable Land Management group that he will discuss May 7 in 102 Mann Library, 10 a.m.-noon.

While the so-called green revolution transformed agriculture with fertilizers and pesticides, improved seeds and modernized farm management that led to huge jumps in production and yields, it also contributed to environmental degradation, Hobbs said. Soils in many parts of the world, such as South Asia, have suffered from excessive tillage, leading to erosion and nutrient mining. With the increased reliance on chemical fertilizers and pesticides, such biological amendments as manure and compost have not been added back to the soil, Hobbs said.

"Business as usual will not get the job done," Hobbs said. "Soil health has to become part of the equation."

He was a panelist recently at a seminar hosted by the Cornell International Institute for Food, Agriculture and Development where Robert Herdt '61, M.S. '63, adjunct professor at the Charles H. Dyson School of Applied Economics and Management, warned that agronomists must be realistic when trying to implement conservation agriculture. The risks and results may vary across time and location, and some small farmers will be wary of short-term economic strain. Others may lack access to necessary inputs or equipment.

"Small farmers ... like innovations. But the innovations have to suit them and meet their needs," Herdt said.

Panelist Rand Jeffrey Milder, M.S. '05, Ph.D '10, a visiting fellow and director of research for EcoAgriculture Partners, a nonprofit that promotes community-based sustainable landscape management, hailed conservation agriculture as "climate smart" agriculture, in that it can reduce year-to-year yield variability and increase resilience in the face of climate extremes.

"It incorporates the best of green revolution innovation within a broader ecosystem management framework, while also taking into consideration social and economic issues," Milder said.

It requires communities to look beyond the boundaries of individual farms and villages, which can be a challenge. However, a pilot project to create a new regional breadbasket in southern Tanzania while also conserving natural resources has shown great promise, he said.

The 20-year, $3 billion project will introduce 865,000 acres of land into food production, which is expected to lift 2 million people out of poverty and contribute $1.2 billion in annual farming revenues.

Milder said he has seen polarization among some agronomists and policymakers; advocates of green revolution agriculture are skeptical of the science behind conservation agriculture, while some conservationists resist the use of any modern inputs.

"Nine billion people by 2050 leaves no room for dogmatism," Milder said. "We need to take the best from all of these traditions and come up with a sustainable solution, and I think a university like Cornell is a great place to model how that can be done."