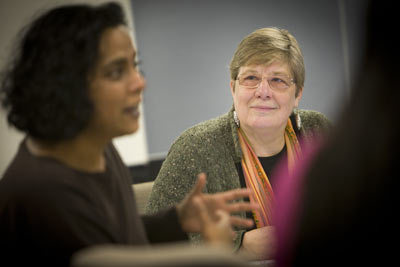 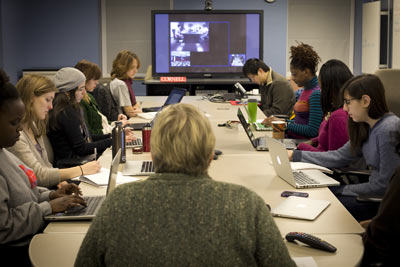 Jason Koski/University Photography
The Bodies at the Border class teleconferenced with students in Mexico and India.

The students waiting for their Bodies at the Border class to begin chatted enthusiastically about a movie they'd just seen, and the Cornell professor asked which film. Not an unusual event -- except that the movie watchers were almost 8,000 miles away.

While distance learning classes using videoconferencing are common in the sciences and professional schools at Cornell, the humanities are only beginning to take advantage of this powerful pedagogical tool. Bodies at the Border used videoconferencing to bring Cornell students together with scholars and students in El Paso, Texas, and Calcutta, India.

The Cornell students included graduate students and undergraduates from eight different majors in three colleges; the students in Calcutta were all graduate students in the field of comparative literature. Many of the El Paso students, however, were nontraditional, with prior professional experience in fields such as criminal justice, migrant ethnography and border enforcement. Thus, students were able to hear about issues from people in the communities where they were happening and from people who may have been personally involved.

Jamila Grampus '12 described the videoconferencing as turning Ithaca into a virtual border. Margaret Gichane '12 agreed, noting that the class "added a lot of context that you can't just look up. Hearing people on the ground experiencing these things day-to-day adds a different perspective from what we read in the text."

Technology was an integral part of the class. Participants in all three countries contributed to a group Twitter feed, and virtually all the Cornell students had computers open in front of them during class. When a student mentioned the photo of a grenade-wielding boy, Castillo had her tweet the URL, while Banerjee posted it on the class wiki.

"We are in an age where it is impossible to do work in the humanities in a traditional framework any more, simply because the world is different," said Banerjee. "In order to actually do 'interdisciplinarity,' you need to create new kinds of communities of learning."

While the Cornell professors developed the basic course structuring, all the campuses had input, and both professors and students from the different schools led discussions. The course was structured around readings and visual and new media materials that looked at issues from an interdisciplinary perspective that incorporated everything from sociology to law to political science, and cultural and literary studies. Banerjee noted that during the final class discussion, "the people in Calcutta said that the class exposed them to a whole set of perspectives and texts that they had never imagined existed."

A compendium of the class projects from all three campuses, many of which incorporate multiple media, will be posted online. "We see it both as an opportunity to bring together again these people from various different campuses, but also as an archive," Castillo explained. "It's a continuing body of work that we want to develop."

More videoconferencing classes are in the works, and potential partners include Mexican and Bangladeshi campuses. Said Castillo, "The only limit is the number of screens that can be up at the same time and still have people talk."