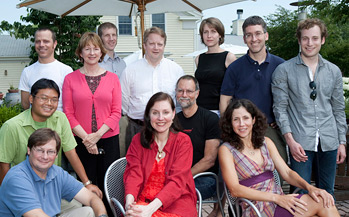 Three years ago, Valerie Hans, professor of law, applied to participate in a Cornell project that would bring together social scientists working on how people make decisions. Her goal was to better understand how juries make decisions about damage awards -- an area that lacked a theoretical framework. "But it succeeded beyond my wildest dreams," Hans said.

Hans and Valerie Reyna, professor of human development and of psychology, for example, applied Reyna's model of general decision-making to how juries decide to award damages. "I've presented it to legal audiences, and there's a lot of interest in it," Hans said. "To have a theoretical model that's enriched by the kinds of new knowledge about economics and psychology that we were able to learn from our colleagues in the group was really fantastic." The pair has also co-written a scholarly article and applied to Cornell for a small grant to test the model, she added.

The project team also encouraged Hans to do something she may regret, she quipped: sign up for a 10-day neuroscience boot camp.

Research by economists and psychologists on how people make decisions is an area that has exploded with scholarly work in recent years, but Cornell is one of the few universities where top-flight economists and psychologists are talking to each other about such research, said project team leader Ted O'Donoghue, professor of economics. But the Cornell scholars, who are spread across campus, have rarely had the chance to design experiments or publish papers together.

"We said, if we put our economists and psychologists together in an environment that encourages them to engage in a more intensive way, let's see what emerges," O'Donoghue said at a recent project celebration.

In particular, the project fostered work at the intersection of law, economics and psychology, an area in which Cornell has many scholars, and catalyzed a major conference and a volume of research in that area. The project also laid the foundation for future research in cognitive neuroscience with a workshop on the tools of neuroscience, a major conference on the neuroscience of risky decision-making and a forthcoming edited volume, O'Donoghue said.

Other research included Peter Enns' (government) finding that public opinion influences Supreme Court decisions in real, substantive ways, even when the public is unlikely to be aware of the case before the court. David Dunning (psychology) suggested that the more a person wants an object, the closer she perceives it to be. And Benjamin Ho (Johnson School) determined that that so-called "apology laws," which make doctors' apologies for botched medical events inadmissible in court, result in the greatest reduction in average payment size and settlement time in cases involving severe patient outcomes.

"These models of decision-making have had a significant impact within political science, and you see them in sociology and other spheres as well," said Kenneth Roberts, ISS' Robert S. Harrison Director and professor of government.

It's the interactions among 14 affiliated graduate students that may have the deepest impact, O'Donoghue said. "This is a group that is not tied down to standard traditions and is going to be much more willing to think outside the box."