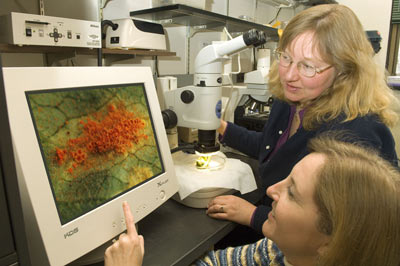 Found an odd bug in your closet? Rhododendrons inexplicably wilting? Need a toenail analyzed? There's a lab for that.

Cornell's College of Agriculture and Life Sciences is home to several diagnostic centers that analyze scientific samples and those sent in by citizens.

For $25, anyone can send their mystery bugs to Jason Dombroskie, director of the Insect Diagnostic Lab. Sometimes he can make an identification from a digital photo; others require a full-on dissection.

Homeowners, farmers and pest control companies are common customers among Dombroskie's average of five insect identifications per week. In one case, Dombroskie's analysis of plaster beetles from a woman's closet led to identifying not only the insect, but a mold problem. In another, he's helping find the source of insects squished in plastics manufactured by a company in Norway.

This summer, Dombroskie will work with New York state to monitor for various potential problem pests, including the light brown apple moth -- a "huge pest" in California that is notoriously difficult to identify that is also the subject of his Ph.D. dissertation.

The Forest Service and New York State Department of Agriculture and Markets are big customers, and their samples sometimes drastically increase the clinic's workload, as when the plum pox virus first made an appearance in the region.

"The year we found it for the first time in New York state, we went from 15,000 to 65,000 samples in a few weeks," said clinic director Karen Snover-Clift. After the terrorist attacks of Sept. 11, 2001, Cornell's diagnostic clinic was also tapped to become a regional center in the federal government's efforts to protect the nation's food supply. Since 2002, whenever a National Plant Diagnostic Network member laboratory diagnoses a plant pathogen or pest, they send their identification to a national repository.

"The objective is to have this national network of experts all looking for certain pathogens, and when new things come in, we're alerted to that," Snover-Clift said.

So far, there have been no intentional attacks on the food supply, but the national repository has proven tremendously useful in spreading the word about newly introduced pathogens, such as boxwood blight and Japanese apple rust, Snover-Clift said.

The Cornell Nutrient Analysis Laboratory has the largest remit of all: from toenails and hair to mushrooms, lemons, ink, cement, wine and nearly anything else you could think of.

Its most common analyses are soil, plants and water. The lab can offer a dizzying array of information on each sample. On soil, for example, most labs do a standard chemical test with information on nutrients, metals and acidity. The lab adds an assortment of physical and biological tests that gives a better picture of total soil health and allows farmers to maintain productivity without resorting to over-fertilization. Home gardeners curious about whether there's too much lead in their soil can also send in a sample and have it analyzed for just $14.

"The more parameters we can monitor and measure, the better we can increase agricultural production and minimize environmental damage," said lab director Michael Rutzke.

Lab specialists have helped an organic mushroom farm determine why its produce was sending customers to the hospital (high arsenic in the soil). They're helping North Dakota farmers figure out how to reduce cadmium in their wheat so they can export to Europe. They're testing Kenyan soil and plants to help a researcher learn more about children's nutritional status.

As for toenails, they and hair are the best indicators of long-term toxicity exposure, Rutzke said.