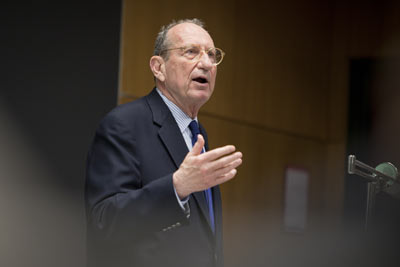 Lindsay France/University Photography
John Deutch discusses the benefits of responsible fracking in a sustainability lecture May 8.

Deutch spoke on campus May 8 as the first lecturer in Cornell's Atkinson Center for a Sustainable Future's new sustainability lecture series, "Outside Voices."

"Anti-fracking" activists across the country have protested hydraulic fracturing, or "fracking," for its potential damage to the environment. But Deutch argued that if companies conscientiously try to minimize their environmental impact, the benefits could be "magnificent."

"We have over 100,000 domestic jobs created in the natural gas industry," said Deutch, an emeritus professor at the Massachusetts Institute of Technology who has served as deputy secretary and undersecretary of defense and as director of the Central Intelligence Agency (1995-96), among other federal positions.

"We are obviously going to pay much less money for importing gas from overseas. This is the biggest change that has happened in energy during the 40 years I've been following the subject," he said.

The new influx of gas will be used for several purposes, Deutch said, including home heating, replacing coal in the power sector and pushing out oil in the transportation sector. While this may be bad news for nuclear energy and renewable energy, Deutch said, it represents an enormous step toward helping the United States wean itself off foreign oil.

"These were huge and unexpected reserves [of natural gas]," he said. "Their production has led to enormous benefits to our country, but also presents challenges of how this resource will be used in a safe way."

As chair of the Secretary of Energy Advisory Board Natural Gas Subcommittee, Deutch said he helped develop recommendations on how to reduce the environmental impacts of drilling on air, water and communities.

"We proposed a philosophy of measure, disclose and improve," Deutch said. "Industry agreed to take responsibility for reporting measurements they had made during their operations, disclose those operations for public scrutiny and work toward ensuring those measurements in the next year would go down."

Because the subcommittee's November 2011 report focused on the environmental impacts of the entire production and distribution process, Deutch said, they did not examine specific concerns, such as the recent public controversy about drilling fluid polluting wells used for drinking water. Nevertheless, the report was "surprisingly" well received, not only by industry and regulators but also by environmentalists and the public.

"We tried to show that the environmental impacts here were real," Deutch said. "If you wanted to get public acceptance, you had to have a method of measurement and continuous improvement."

Deutch acknowledged that the intrusiveness of fracking cannot be altered.

"To do this, we're going to have hundreds of thousands of extra oil and gas wells across the country produced by hydraulic fracturing," he said. "They are, indeed, extremely intrusive in the act of production."

And despite the affordability and geopolitical advantages of switching over to natural gas, burning natural gas still releases carbon dioxide into the atmosphere, just as burning fossil fuel does.

"No matter how much gas we use," Deutch said, "reliance on natural gas does not avoid the threat of global warming."

The "Outside Voices" lecture series aims to bring thought leaders to Cornell to provoke discussion on sustainability issues.

Elisabeth Rosen '12 is a writer intern for the Cornell Chronicle.